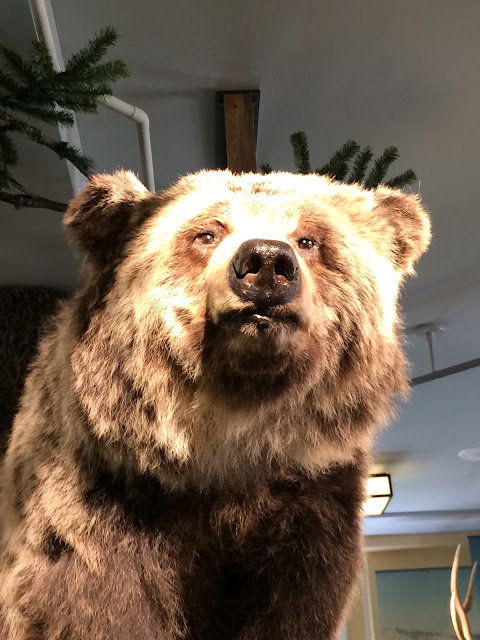 There aren’t many clichés you can add to the spectacular-ness of nature.  And there aren’t many places where you can get the full impact of its largesse than that of the Lamar Valley in the northeast corner of the first US National Park.  From a core herd of 24 genetically pure buffalo remaining a century ago (imagine that: 24 left of the 10 million who once roamed the lower 48) there are approximately 5,000 buffalo roaming free and wild in Yellowstone today.  Wild means that we can stare at them through scopes and binoculars and in line-ups by the side of the road, but rangers can’t help a cow who might die giving birth (surprisingly common), or cure the various diseases that sweep through the herd, or protect them from the cold in particularly vicious winters (another reason for high mortality). 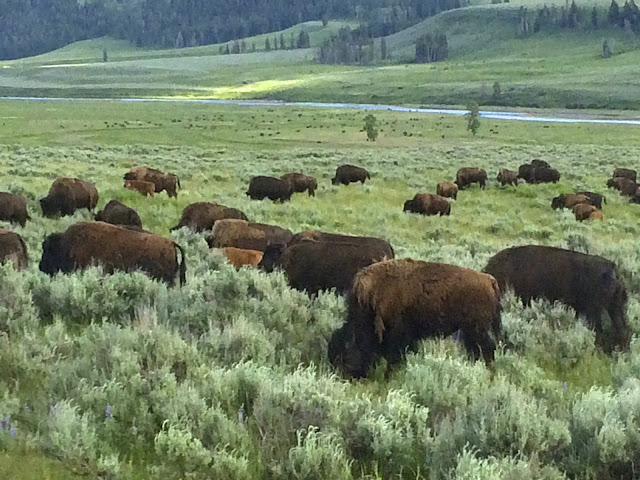 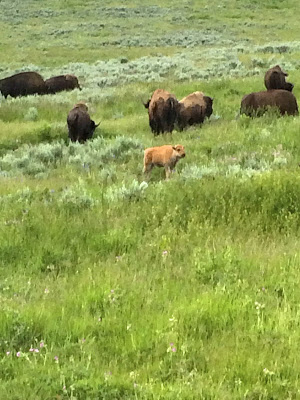 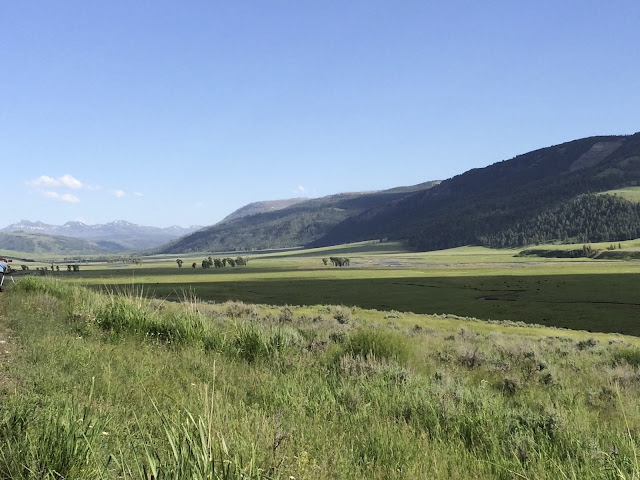 They are massive and thrilling with their great triangular shaggy horned heads. And so familiar -we’ve grown up with them on the nickel and in every childhood Cowboy and Indian movie (if you are of a certain age).  It’s breathtaking to see them spread out across the Lamar Valley – film set extraordinaire, munching, lying down, red calves born a month previously kicking up their heels and chasing each other.  They are the largest mammals in North America and have no natural predators except us – and we did a spectacular job. 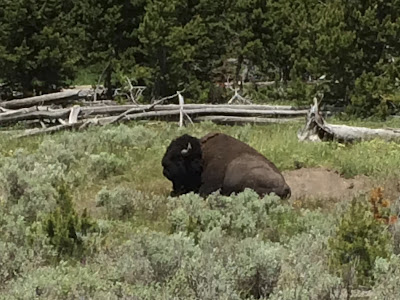 The history of the bison is the history of the West, their deliberate destruction meant the ruin of Native Indian cultures enabling the push to the coast – America from sea to shining sea.  These great Western vistas conjure unique and conflicting emotions: who were these extraordinary pioneers who took on the full force of nature and topography and walked, climbed, rode, pushed their way over mountain and river in the blast furnace of summer and bone chill of winter?  How did they do it?  At what cost? And does this explain why their red state descendants are so ornery, so hands-off? 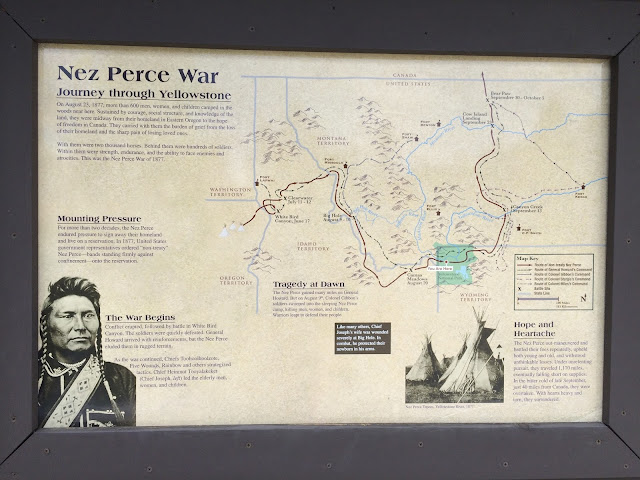 The bison are so common that we start to ignore them.  One lies literally next to the side door of the hotel in the shade, looking very docile. This presents a problem as you are supposed to give them a wide berth. They can leap up and charge at 35 mph and have done so quite a bit lately, no doubt encouraged by the idiots who have tried to place children on their backs. 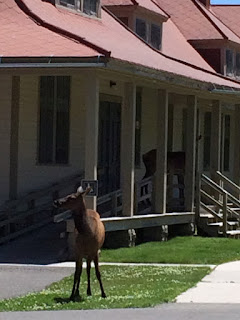 A few elk, with barely fuzzing horns munch by the side of the road. The elk have just calved and both mothers and babies are not in sight. The yearlings hang out en masse on the lawns of Mammoth, park headquarters, with rangers shoo-ing people away. Not tame! They can charge in an instant.  It’s a wolf-eat-elk world in Yellowstone; the wolves have restored the balance of nature – cruel as it is, by trimming elk herds and allowing multiple species to flourish and add to the food chain.
While we don’t see any rock star wolves 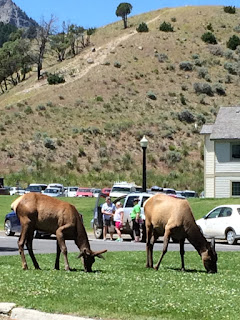 (they have professional spotters out at dawn), we do   see grizzlies off in the Hayden Valley, although “see” is an exaggeration. We see brown lumps that are not bison and people leap out of their cars with binoculars. Sure enough they are grizzlies. Rangers clear the road quickly if total traffic block threatens.  Yellowstone is one of the largest national parks, second to the Grand Canyon and perhaps Yosemite, and its sheer diversity of broad valley, largest high-elevation lake, longest undamed river, many spring waterfalls, bizarre geothermal formations enthralled me.  However, it’s true that the park is crawling with people and if it’s this crowded so early in the season – not sure I’d want to be here in August. 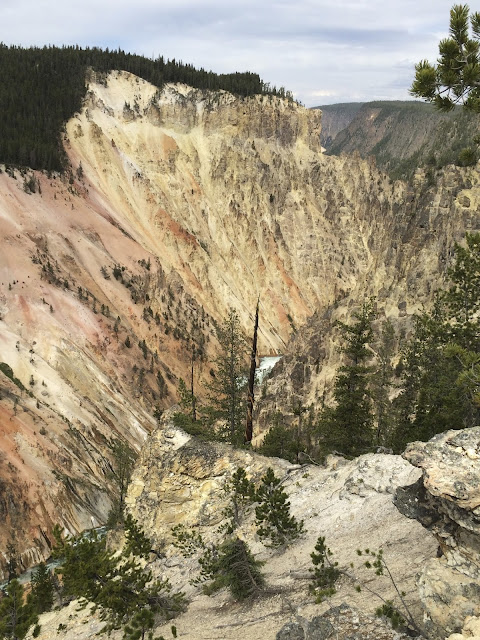 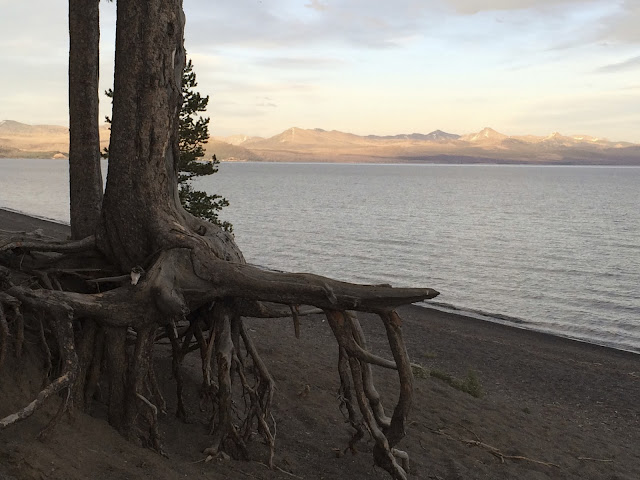 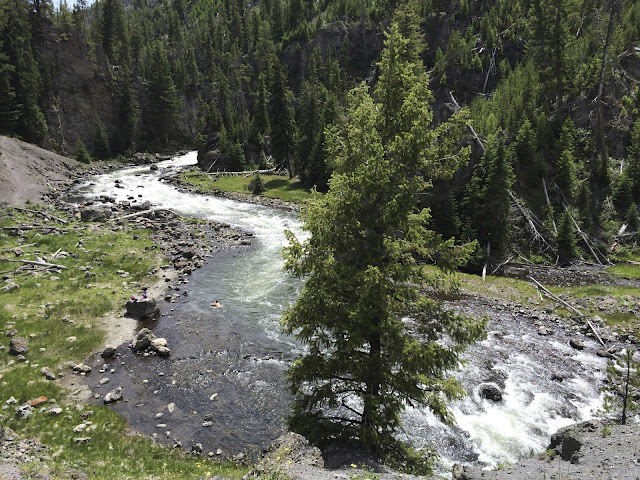 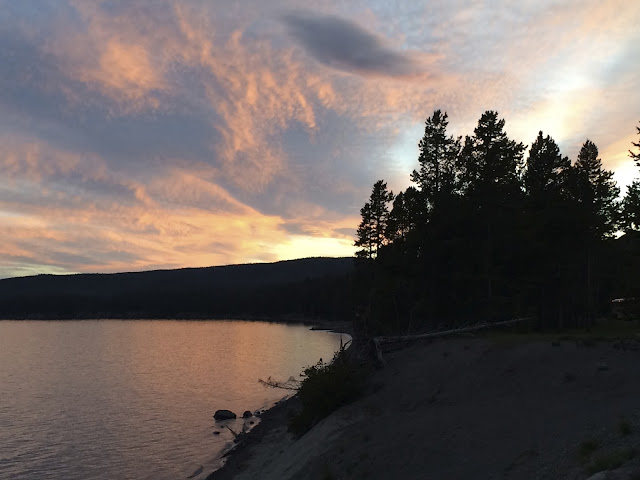 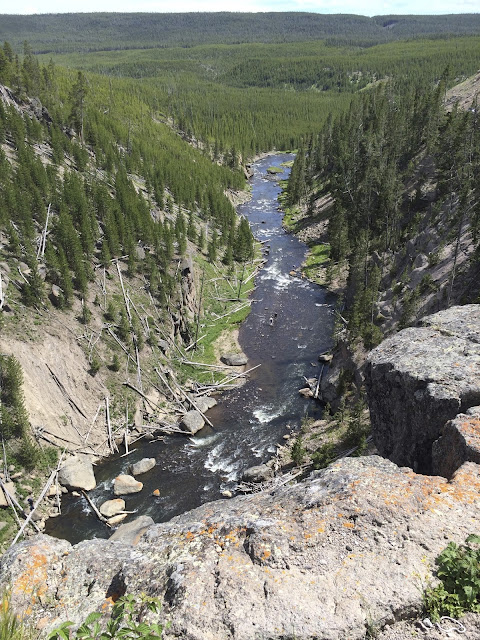 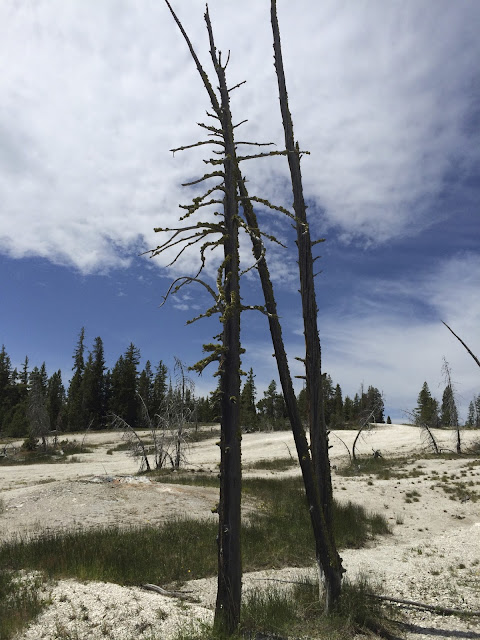 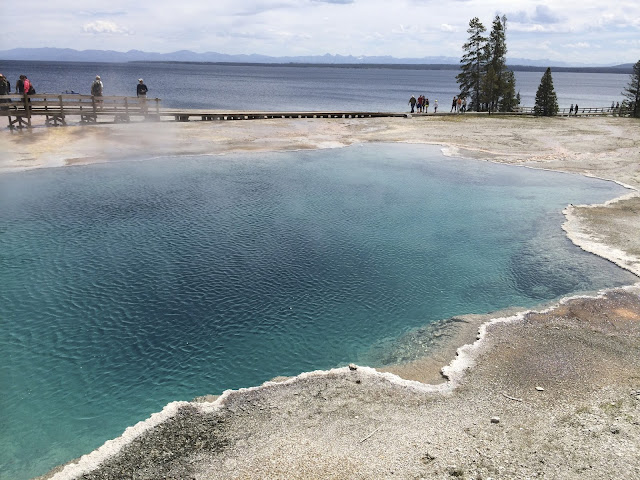 There is however, (stereotype alert!) a new American Buffalo and it ain’t pretty. It’s the two footed behemoth – mostly white, middle aged women, staggering under their own weight to the point of limping, sometimes accompanied by equally massive males.  This is not “gotta lose those extra 25 lbs, or 50 lbs or even 100 lbs.” This is obesity on a scale that I’ve never seen.  Either we are in a convention of huge people – which means the convention started in the Denver airport, followed us through Cody, Wyoming, and on to the Lake Yellowstone Hotel.  Perhaps because Yellowstone is a park that you can pretty much see from your car that people who can’t get out of the car show up.

There are many variations on this theme:  the old give-‘em hell couples on their tricked out massive motorcycles – the women with custom made chaps for tree-trunk legs and the men with beer bellies that reach the handlebars, sporting thin, greasy ponytails hanging down the backs of their leather jackets.  There are RV families with three generations of pale pink waddling women who look like they have eaten nothing but biscuits and grits forever. As much as I’ve travelled, I have never seen such obesity and it is terrifying.

Other observations:  the very old are on the move. Undeterred by time (or maybe because of it) they are determined to get through the bucket list –walkers, canes, wheelchairs be damned.  And at the other end of the spectrum, families with tiny children, strollers, babes in arms – how do they do it? (And how do they afford it? Yellowstone is huge – hard to leave the park for the night and return day after day — and you are stuck with expensive park prices for everything from food to lodging.) 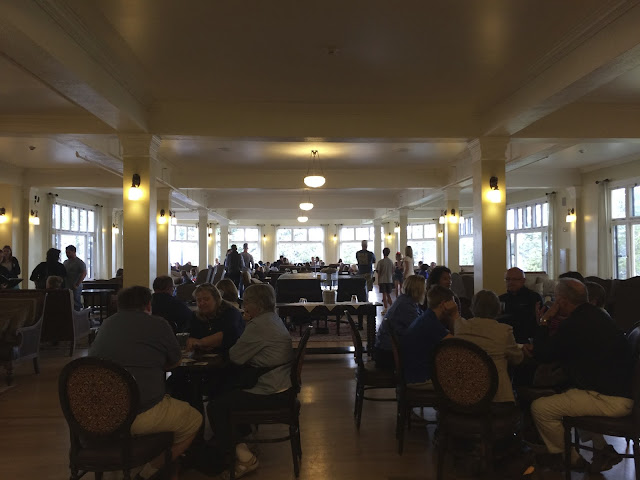 The lake Yellowstone hotel is massive – it could be a cruise ship — and the people are sadly reminiscent of one.  The place costs a fortune – beggars can’t be choosers – and 2 rooms for a family with 2-3 children can cost upwards of $800/night.  The staff comes from around the world to work for the summer – we met kids from Poland, Bulgaria, Pittsburgh, Florida, Costa Rica. 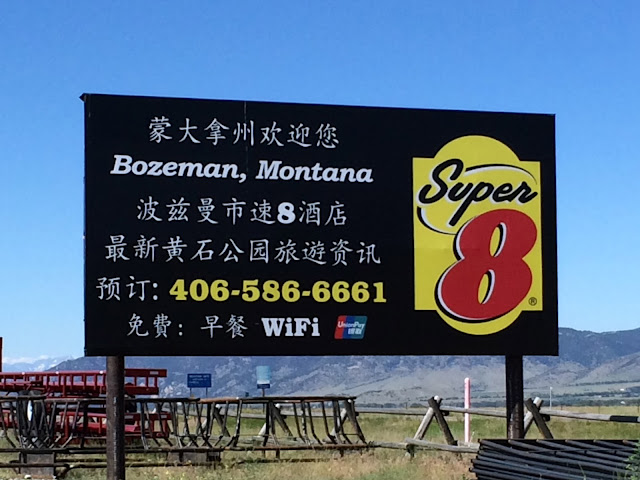 Serious stereotype alert! The Chinese have hit the road, and with a rising middle class in the tens of millions they are everywhere –  pouring out of huge buses wearing many-colored floppy sun hats, arm protectors, umbrellas, (generally decked out as though they are terrified of the sun) and taking pictures of themselves in large group poses holding a V sign over someone’s head, unaware of the dangers of cliffs, hot springs and wild animals. Some take videos with programmed background music (!!) and many carry the selfie-extenders we first saw in Rome.   Yow.  “Here I am walking down a path next to a geyser, talking to no one and holding out a camera at the end of a ski pole – look I (and not the geyser) am the star of my own film!” 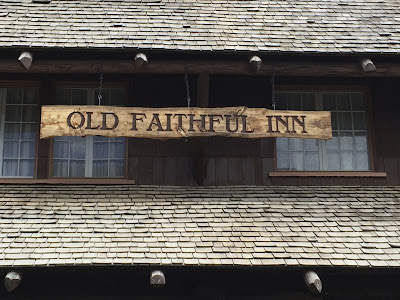 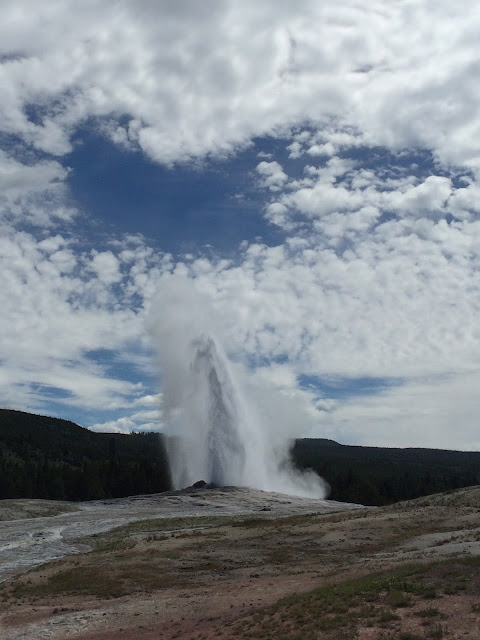 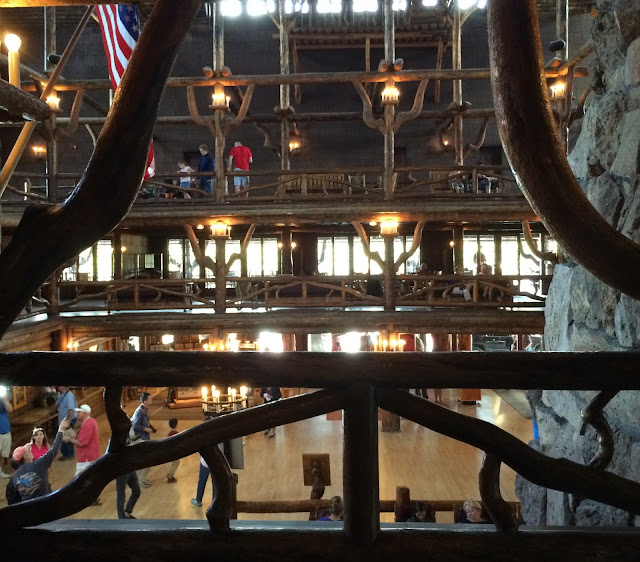 The Old Faithful lodge, built in the 1920s is a fanciful vision of art deco meets log cabin with an interior atrium that reaches up four floors past a huge central stone fireplace and up to a catwalk, and crow’s nest; off limits since an earthquake (mild ones are nearly constant in the park) damaged its support timbers.  We happen to hit Old Faithful right on time – some sights are so iconic that you’ve seen them in your mind’s eye so often that the real thing barely holds up. The western side of the park, with the geothermal eery specatcles of scorched earth and steaming vents and bubbling mudpots is much less appealing to me.  It’s fascinating science, as the entire park is basically a caldera of boiling and active volcano, which, if and when it blows, may very well eliminate life as we know it with the force of many atom bombs. 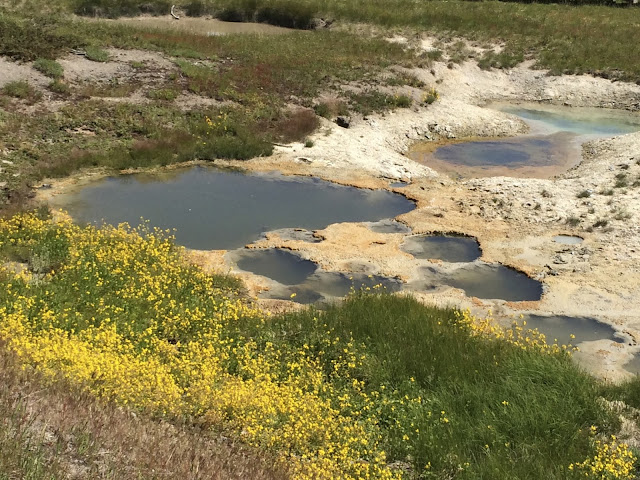 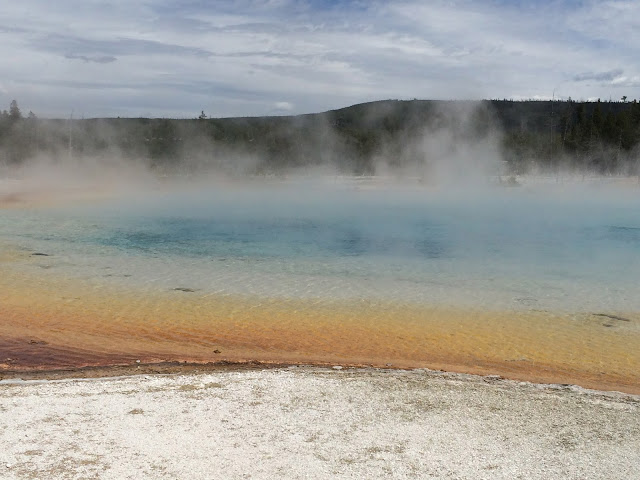 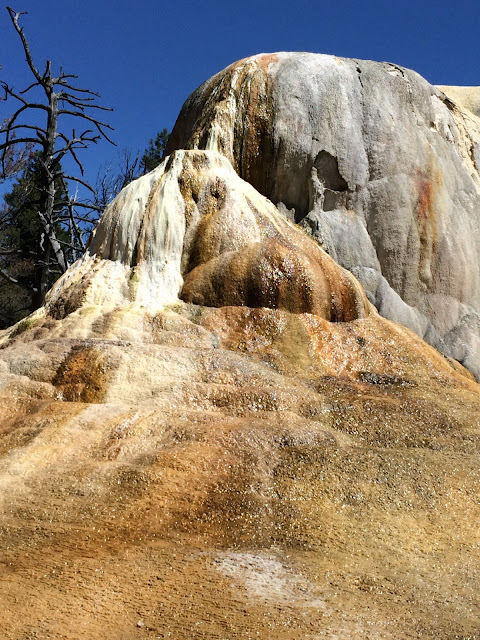 Our national parks always make me proud to be American. They are a national treasure and they have been nickeled and dimed to death.  I don’t get it – it’s one of the things that the federal government has done superbly – quit griping!  And most of the parks exist in red, hands-off, western states where they are an essential economic lifeline. 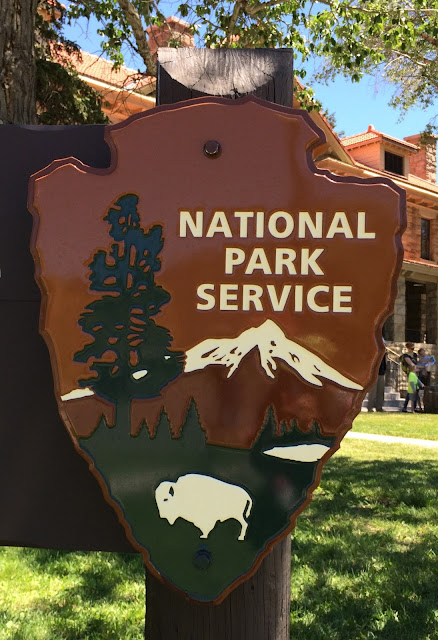