The Mandalay (International) airport was recently built by a Burmese general to be near his hometown rather than the large commercial centre and former royal capital of Mandalay. During the airport’s construction the general stole half the concrete intended for the runway and hence it can’t land heavy international jets, so the international airport is only domestic.  Welcome to Burma.  Either way it has only two departure gates and they are packed with aging white people waiting for flights to Heho and Bagan and speaking in  — well — babel; German, French, variously accented English, Hebrew (amazing the Israelis who are here) all of us up at the crack of dawn ready to elbow our way on the non-seat-assigned flights.

We have come down from the old British hill station of Maymyo on the switchback curves of the Burma Road.   The hill stations were built a century ago by the Brits to escape the excruciating summer heat, and they managed it so well that the temp is approximately the same as November in Boston and we are unprepared and freezing.  Remarkably, Maymyo has a temperate botannical garden that looks like it was airlifted from Hyde Park, complete with a recreation of Big Ben in chrysanthmums. 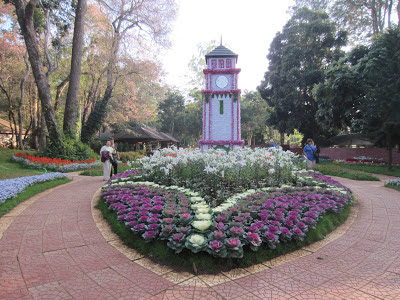 We’ve been kicked out of our hotel in Mandalay by either bad planning or oversight or an invasion of Chinese engineers and banished to the hills where we check in to the Governor’s house in back of the Aureum Palace Resort hotel, the original summer home of the local British Governor built in 1905.  In the twilight it looks like a grand hotel in a national park in the Rockies, vaguely arts and crafts, and only contains 5 huge guest rooms – any of which could be a decent 2 bedroom aptartment in NYC. 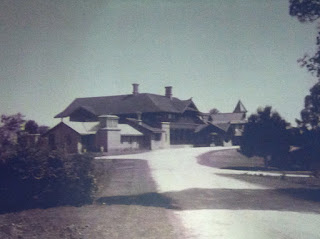 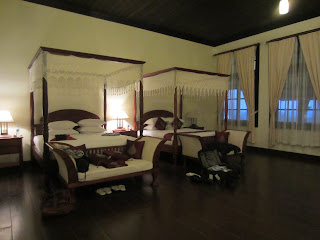 As we step out of the golf cart driven by the very young man wearing longi (like a sarong) with a blanket over his shoulders and bare feet in flipflops (must wear – part of his job, no matter how cold) we step into the entrance hall to see 5 full-sized wax mannequins dressed circa 1920 as 1) the Governor in full medalled uniform (reaching out his waxy right hand to shake yours) 2) a tuxedoed butler with silver tray, 3) a colonel with pipe, 4) a porter with eager smile, and 5) a rough and ready colonial-era guest or hunter or adventurer complete with safari hat.  The light is dim, the ceilings high, we are exhausted beyond description and the last thing I expect is Mme. Tussaud in the hills of Mandalay. 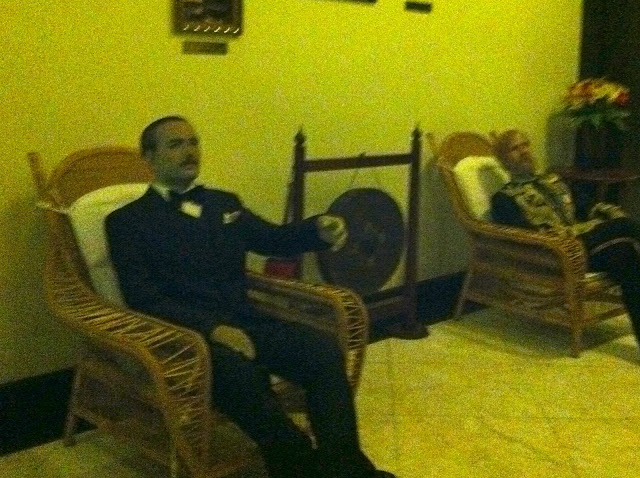 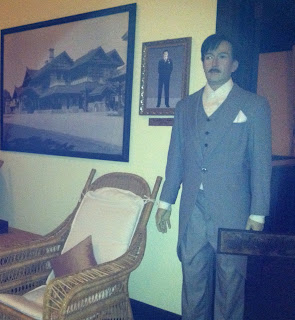 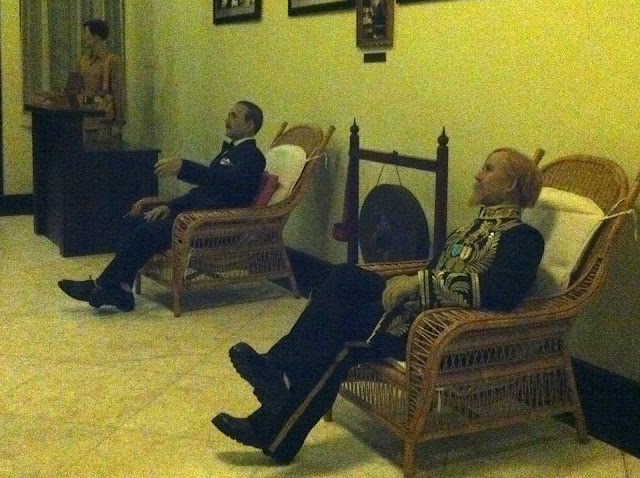 The house is magnificent bordering on totally creepy – the inhabitants taxidermied. The wrap-around terrace stares into a horizon unbroken by electric light or man-made edifice of any kind.  Twilight falls rose and lavender and the temperature is dropping fast. It turns so black you can’t see your proverbial hand in front of your face.  Nine of our group of 24 are the only residents in this echo-ey mansion with dark timbered beams and white walls devoid of decoration frozen in time and out of context. The dining room (table covered in sateen, linen, china and crystal) is set for 12 who will never eat here, the ballroom has been converted to an indoor swimming pool where no one will swim, the upstairs rooms have 15 ft ceilings so the lights are so high and so dim that the creepiness factor ratchets up, and the beds are high enough that you have to climb up into them, four poster-ed and canopied – all of which I hate.  The toilet (at first) will not flush and the hot water comes out in volcanic bursts.  The fuses keep blowing and the lights flicker on and off.   I fear that we are on the set of Downton Abbey SouthEast interpreted by Stephen King and we have a group hug to give us heart.
We have just come from a bus ride that included vomiting on the bus and so much coughing that we could be headed to a tubercular ward.  After leaving  the flat, dusty city of Mandalay and climbing up the Burma Road switchbacks, (praying that our driver and the bus can handle the curves — we have to stop mid-way so the engine does not overheat) past the huge scar of the natural gas pipeline being constructed by a permanent team of Chinese engineers (hence the lack of hotel rooms in Mandalay) cutting a wide swath across the Burma Road from the Bay of Bengal to the Chinese border.  There is much discussion about the bad Chinese and how much they are hated, feared and resented by the Burmese (and pretty much everyone they have ever been or are currently in contact with).
Along with the military and the generals, the Chinese are all-round bad guys, responsible for accumulating great wealth by running the drug trade in the golden triangle (China, Thai, Laos Burma), buying up good land, building beautiful second homes and causing real estate prices to rise enormously.   In country where there is no free public education, no medical care and virtually no industry this is much resented.
The next morning we rise at 4:00 AM (I kid you not) for the reverse trip down the switchbacks of the Burma Road back to Mandalay and the aforementioned airport where the electricity has failed twice in the time it has taken me to write this.
This is what the road looks like as the country wakes up and gets moving between 6 and 7:30:  Monks walk along the side of the road swinging their alms baskets, shoulders wrapped in blankets but barefoot. Palm thatched shanties line the road, with dirt floors carefully swept out. The smoke from dozens of open wood fires tints the air a misty clogged blue. Children run from house to house bare-legged wearing brightly colored sweaters. Life hasn’t changed much in hundreds of years (except for electricity and the occasional satellite dish).
People cluster around the local well, no one has running water. In the quarry nearby, people crush rock with huge sledgehammers, scoop up the gravel in wicker baskets, load them in baskets on poles across their shoulders, or on their heads (mostly women) and stagger with them to the next station.  The dust from the quarries (alabaster) mingles with the smoke and clings to the trees, turning them a grey-green.  We pass lush agricultural fields of mango, banana, dahl (lentils) and peanuts where farmers wear conical hats and ploughs are pulled by two white oxen. We also pass fields of garbage – a depressing and ubiquitous feature of the third world. We pass a railway track and I can see only one or two lone figures squatting  — a great improvement over India.

Under duress (see vomiting on the bus above) we stopped in one such roadside village for emergency toilet and while it was a squatter with no running water, it was clean and did not smell.  The hole and footholds were porcelain and one flushes with a pail of water in a soapstone trough next to the toilet. (Many pailsful of water I discover). I am getting to be a pro at this.  The people whose house we have invaded to use their very simple but totally adequate toilet are so gracious and so kind and so gentle and are horrified at my many offers of kchat (850 to the US dollar — only very crisp, unfolded, new, pristine bills please.) The lady of the house offers me a bar of soap standing at her outdoor tub of water, and — like a grinning fool, I pull out my jar of Purell. I don’t know what she thinks this is — but I suspect she thinks I am quite uncivilized by refusing her offer.