Flying on the ATR 72-500 French made 70 seater from Mandalay to HeHo (pronounced something like Hellhole)  there are no seat assignments and we are told that we will have to fight the Chinese for seats.  Our response – they are no match for us Jews). In fact, there are no Chinese – just the babel and gaggle of elderly European tourists. (Observation: travellers to strange places are either very old with time and money or very young with time and no money). We fly over a valley between two serious mountain ranges that are terraced for farming and patched in circular rows of soft heather, bright green and a variety of sienna reds and browns. It looks very rich and neat as a pin.  Are we in California?  This is one of the seats of agricultural wealth of Burma, until 1950 one of the largest rice producers in the world (and heroin).

We are in the Shan State – one of the seven ethnic states bordering other countries (Bangladesh, India, China, Laos or Thailand), which together with the 7 low-lying districts make up Myanmar. We go to a market town where the ethnic Pa ‘O Shan are holding their 5thday rotating farmers market. As with all of these markets where the fish have heads and the chicken have rigor-mortis feet and have been hanging in the sun attracting flies, it’s hard to think about food. 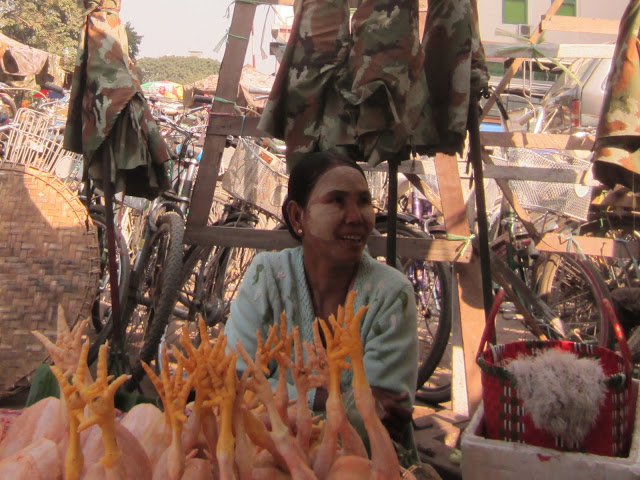 Maybe that’s a good thing. Maybe if you know where your food comes from and you once called it by name, you’ll eat less.  Perhaps this is why we are so obese and they are so thin.  Thin but not starving – the markets are full of abundant produce – and the biggest avocados I have ever seen.  They are also full of flattened, dried sea creatures resembling props in a low budget horror movie, that seem to provide the basis for fish paste – a ubiquitous feature of Burmese cuisine and better than it sounds. 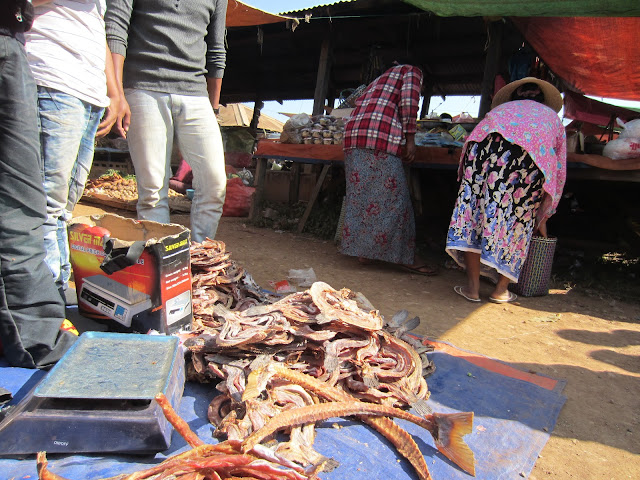 We eat lunch in Kalaw at the Seven Sisters restaurant, actually run by seven smiling sisters who cook and serve a delicious pumpkin–ginger-peanut soup, fresh snowpeas, some kind of stir-fried flowering kale or chard, minced beef, fish cakes steamed in banana leaf and hot lemon custard.   We have started a pattern of silent lunch table (no talking) where we eat calmly and thoughtfully with the painful noises and shrieks from our fellow-travellers in the background.
We are here in Kalow (elevation 4,000+ feet) in the Hill Top Villa in a camp-style bungalow looking out over the mountains (could be the Adirondacks) in another British hill station retreat with crumbling old colonial buildings including a railroad station that looks very much like the one I grew up with 7,000 miles away in Westmount, Quebec, built when the sun never set on the British Empire and all the maps of my elementary school featured huge swaths of the world set apart in Commonwealth pink.
This could not be farther from the current inhabitants of Shan State – one of the powerful ethnic minorities with its own state government – who look to my unpracticed eye a good deal like the Maya of Central America with similar colorful garb.  Both men and women wear longhi – effectively long skirts – traditionally worn without underwear (makes it a lot easier to squat, I can tell you).  Longhi (made out of a rough cotton) are sold everywhere in the markets, and I look hopefully into each fabric stall for silk, or scarves and can’t find a one.  It’s surprising that there is virtually no local silk industry and I suspect that will change as more and more tourists come barging through.  We are still an oddity, but we get smiles and nods and occasional outright stares.  We wave at children and they give us big grins.  I wish I had brought dozens of lipsticks to give away – these are evidently treasured. Several young girls point at me and exclaim “Lipstick! Lipstick!”  I thought it was because I was wearing lipstick but no – it was because they wanted me to give them one so they could give it to their mothers. Virtually every woman wears a yellow paste on her cheeks, sometimes in patterns, made from thanaka (the bark of a tree) mixed with water and used as an all-round sunblock, complexion enhancer, make-up, foundation — you name it. I think about trying it, but the last thing I need is yellow skin — it would go so well with the bags under my red eyes. 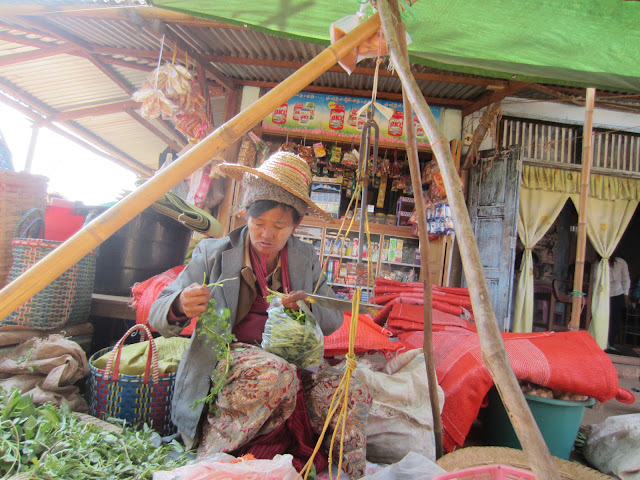 There is a small space heater in our room in Kalaw which throws heat in a range of about 3-6 inches, and unless you sleep with it in the bed, it’s useless.  It feels like the very end of camp on a nippy August night, but at least then you could wear sweats.  It’s Detlev’s birthday and the kitchen staff order a cake that has miraculously appeared decorated with orchids.  We are both sick and close to a low point in our travels, shivering in our cabin and thrilled not to wake up before the barely civilized hour of 6:30.