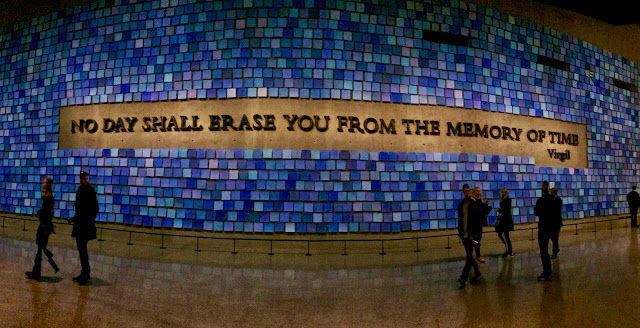 Architect Daniel Libeskind, praised for “his ability to weave memory into physical space (Jewish Museum, Berlin)” has created an underground memorial museum to the lives lost on 9/11 that takes up the entire footprint of the original north and south towers and the plaza between them, seven floors below ground. The above –ground portion of the museum looks deceptively small in its glass enclosure floating between the two memorial pools but once inside and underground, it’s huge. 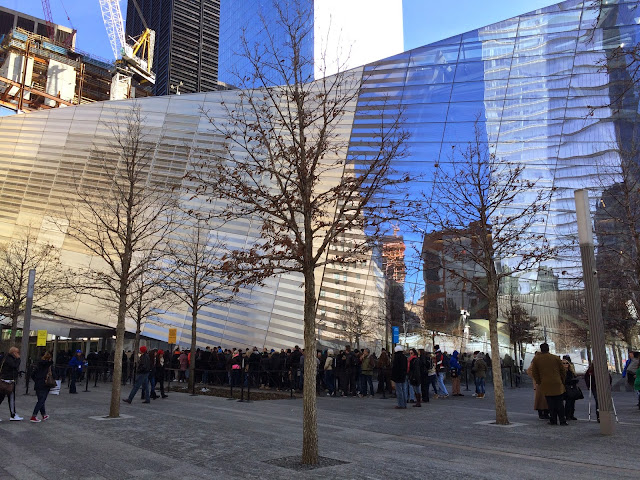 Get your ticket beforehand and save the wait in line.  Tickets are timed entrances to the hour and day, and big bucks – $24 for adults, which rivals any museum I know.  I also opted to spend $20 on a 1 hour guided tour, on the theory that if I’m spending that much money I might as well go all the way.  Mercifully, the tour was not conducted by someone shouting his way over the crowds (which would have defeated the somber mood) but via volume-controlled headsets. Should you feel like roaming away from your group, you can hear the tour leader from a distance of up to 100 feet.  And there is much roaming as the tour proceeds along the periphery of both towers, their original steel columns shorn down to the ground and forming a ghostly outline of each tower. 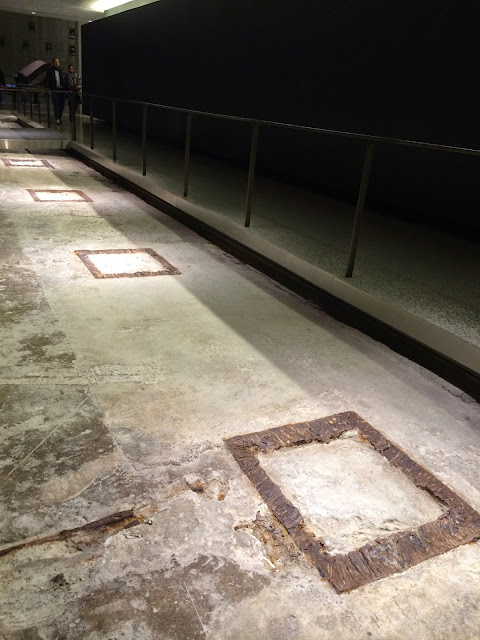 The memorial exhibits themselves are divided into two sections: history and moment-by-moment in one, and “in memoriam”  – the lives of each of the 2,977 people lost in the towers, on the four airplanes, at the Pentagon and in the 1993 WTC truck bombing – in the other.     Truthfully, I am still amazed that so few people died, given the scale of the attack.  I had forgotten that it was the first day of school in NYC for many kids and also a primary election, so many people were mercifully late to work that day.
The 15 minute introductory film (every half hour) is a must – (above ground in the visible museum) entitled, “Facing Crisis: America Under Attack”  consisting of interviews with key decision makers.  Fortunately these do not include Dick Cheney or Don Rumsfeld; architects of the Iraq disaster from which we may not recover in our lifetimes. The interview with former President Bush is actually quite touching – to my surprise. You could have heard a pin drop during the movie (and there were several children present) and after a few minutes you could hear sniffling and see people wiping their eyes (no documentary footage; just interviews).
Here are the things that I found astounding.
The original foundation wall (slurry wall) that holds back the Hudson and is the bedrock into which the towers were built, managed to stand. Had it collapsed, the flooding that ensued would have been even more catastrophic.  Because the wall stood firm, architect Libeskind felt that it should be part of the museum and so it is, rising ghostly and majestically from the depths, as though you are about to climb up and out. Next to it drips tiny amounts of water from the Hudson just to prove its worth. 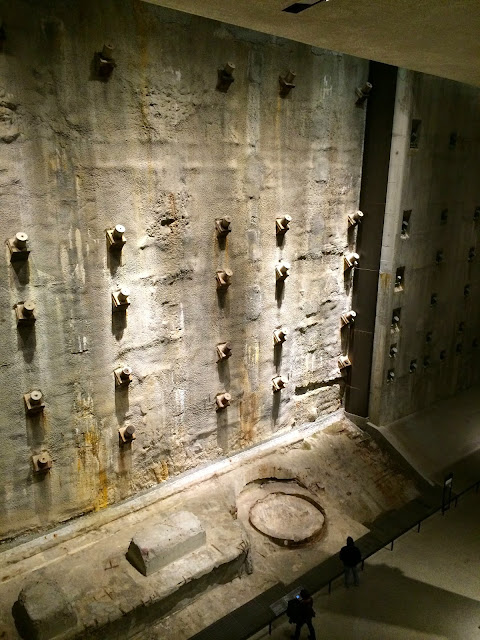 The outer steel beams of the building soared ¼ mile into the sky, The recovered beams from North tower between the 96 and 99th floor bear the imprint of AA Flight 11 as it crashed into the building.  These beams are so huge and so strong that they are bowed but still intact. 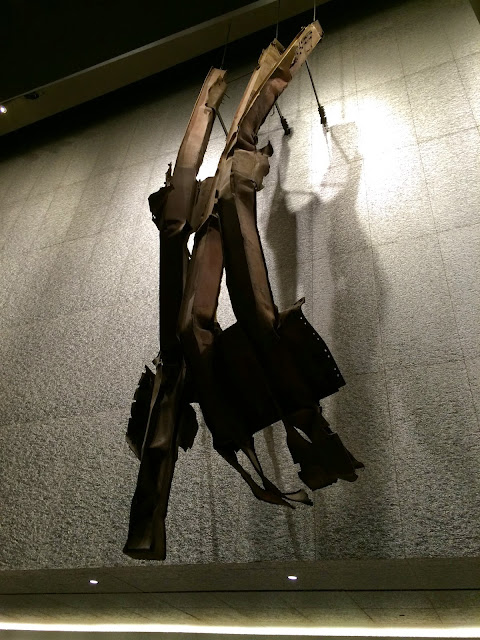 The blue wall beyond which all unidentified remains are held in repository is marked with 2977 blue steel plaques in an almost ancient mosaic with a quote from Virgil: No Day Shall Erase You From The Memory of Time. 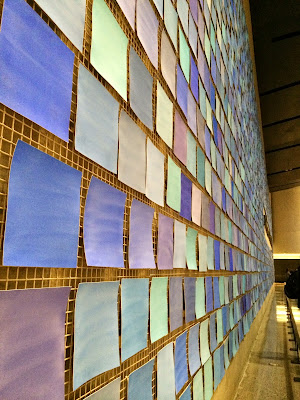 And the last of many touching details is the white rose placed at the name of the victim etched into the public memorial wall on their birthday surrounding the cascading waterfall that disappears into the symbolic rectangular well (bottomless?) at the center of each tower’s footprint. 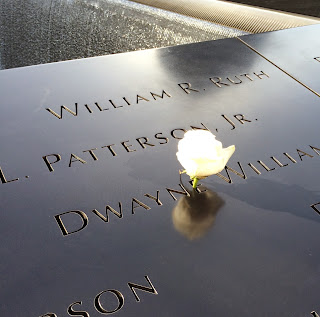 No need to go into any of this – it’s very personal and I expected to be utterly bummed out, but I wasn’t.  In many ways it’s a personal NYC event as well as a worldwide event – and 13.5 years later so pivotal to the Middle Eastern hysteria and perpetual war that has followed. 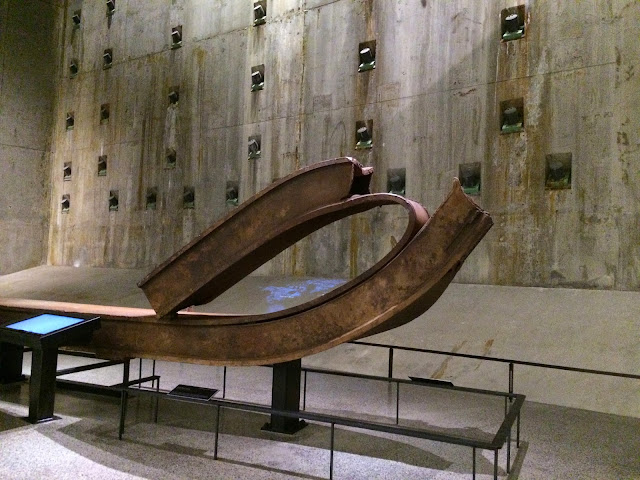 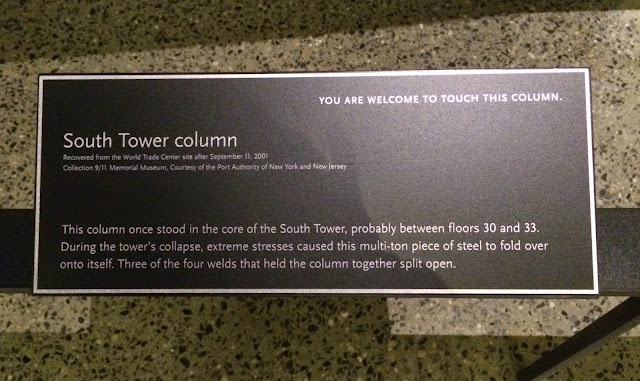 I was reminded of a more innocent America, shocked that anyone would want to hurt us and even more shocked that anyone could actually pull off something so brazen and terribly brilliant.  It reminded me of the rage that I felt that our very best nature had been penetrated and used against us – our open, trusting, friendliness.  Here – come on in – take flying lessons; get a drivers license, go to school, rent an apartment; you’re welcome to a better life!
And how far away that innocence seems.