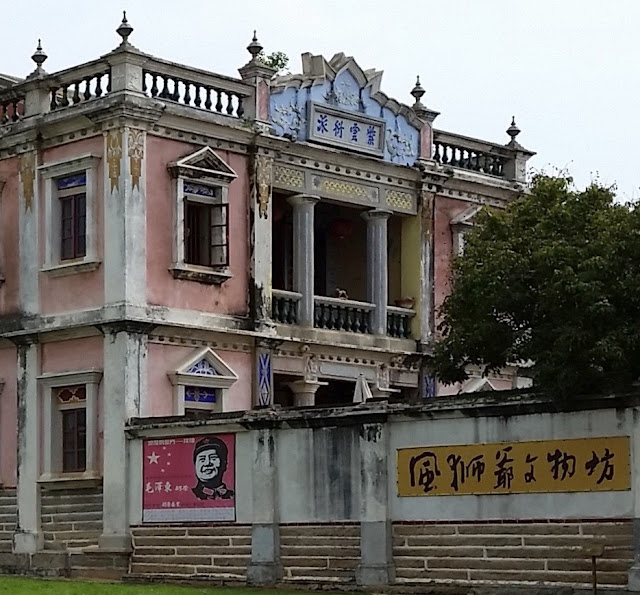 Jinmen, the Cold War, and Cross-Strait Relations:  In a wrinkle of history, when the Nationalists retreated to Taiwan in the closing days of China’s civil war (1949), they held on to the small island of Jinmen, a stone’s throw from the Chinese mainland and an hour’s flight across the Taiwan Strait from Taipei.  The mainland Chinese city of Xiamen, replete with skyscrapers and heavy industrial facilities, (population of 4 million) looms on tiny Jinmen’s horizon.  How could this little island (59 sq. miles; population 127,000) — have held the line between Taiwan and China for 66 years? 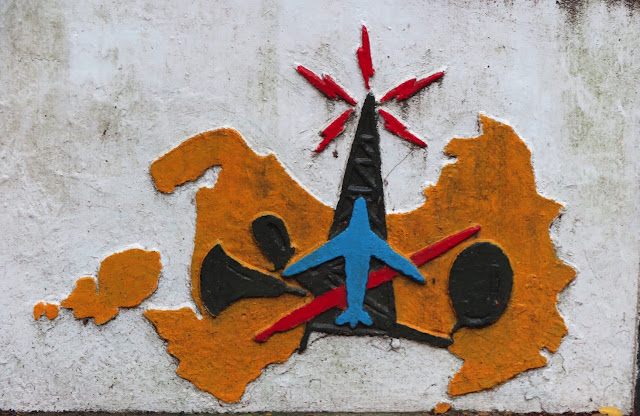 Symbol of Jinmen as fortress and first line of defense 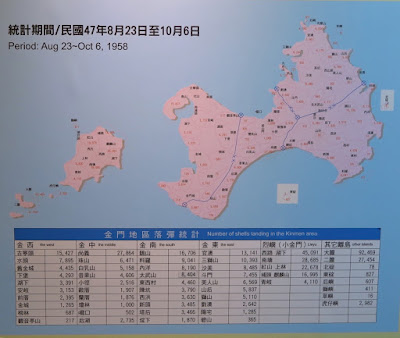 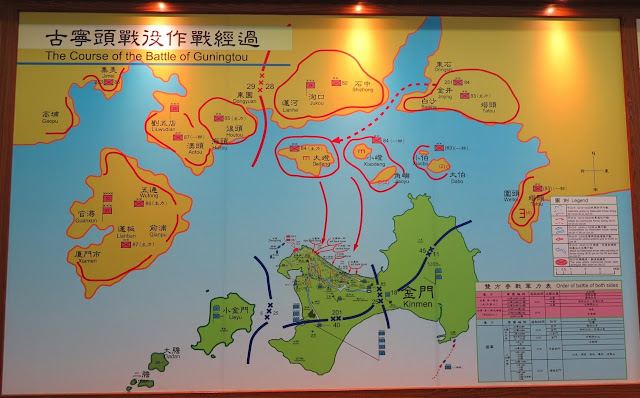 Map of decisive 1949 battle that left Jinmen in Taiwanese hands

Harvard historian Michael Szonyi called his historical work on Jinmen “Cold War Island” — an accurate term for this former fortress.  In the 1950s, there were several cross straits crises.  One of the museums commemorating these conflicts noted that the Chinese bombarded Jinmen in 1958 when it hoped that the U.S. would be sufficiently distracted by having dispatched troops to Lebanon that it would turn a blind eye to Chinese attempts to take Jinmen as a first step towards conquering Taiwan.  Instead, Eisenhower sent military assistance to the Taiwanese, China’s aspirations were thwarted, and even though there have been steady Chinese bombardments until the late 1970s, Jinmen has remained in the hands of the Taiwanese. 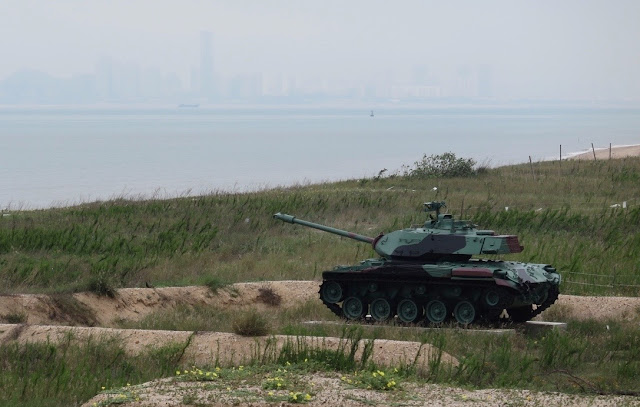 Tank on display in Jinmen, Xiamen skyscrapes on the horizon 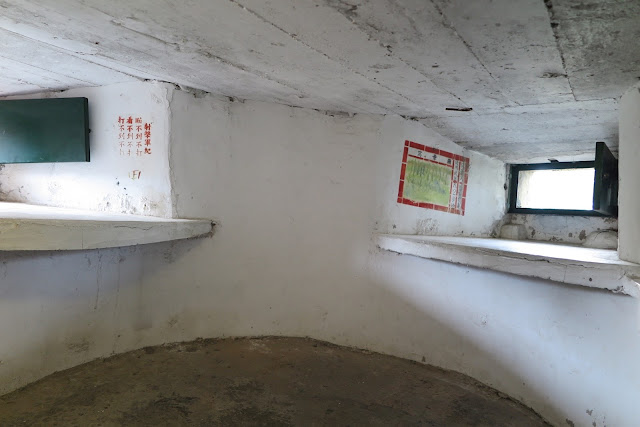 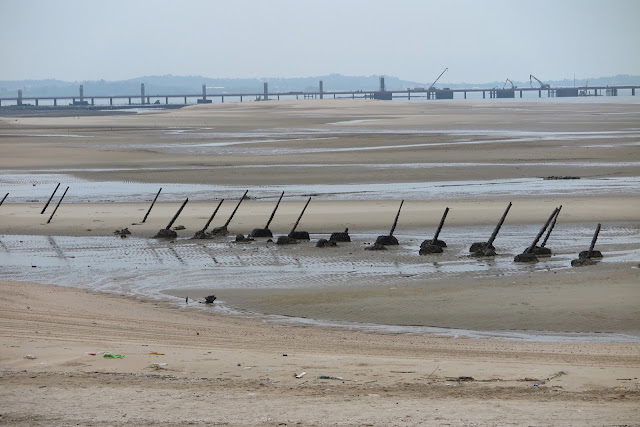 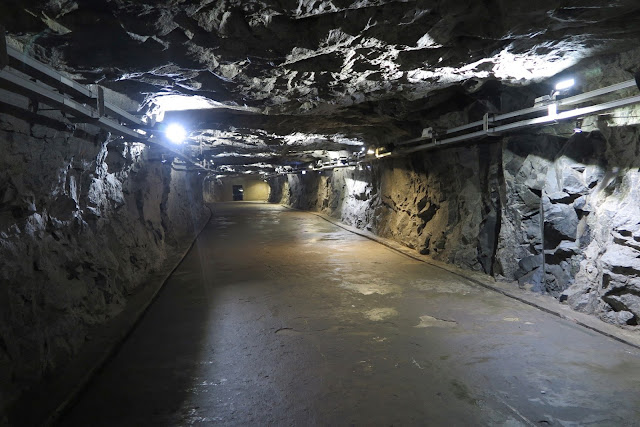 Jinmen has become progressively de-militarized,  and today tourists are equally welcome from the PRC and elsewhere.  In fact, Jinmen as armed fortress is prime tourist fodder.  A maze of subterranean tunnels is on display, along with spiked beaches (meant to spear enemy landing craft), tanks, concrete pillboxes, and museums and parks dedicated to the courage of Nationalist soldiers and the fortitude of the populace. Decades of Chinese shelling have even produced a thriving craft industry in the manufacture of high quality steel cutlery made from shell casings! 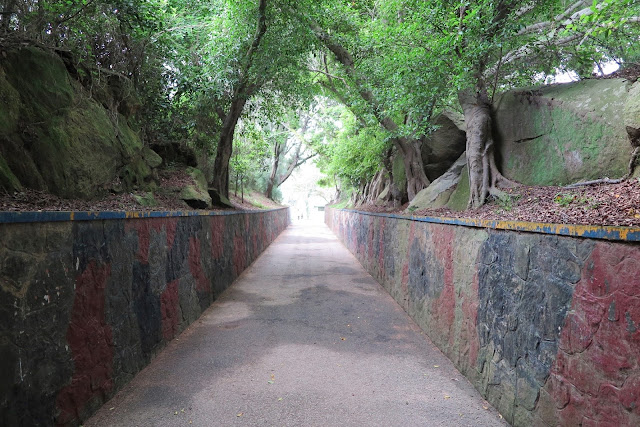 Path to a tourist site in Jinmen 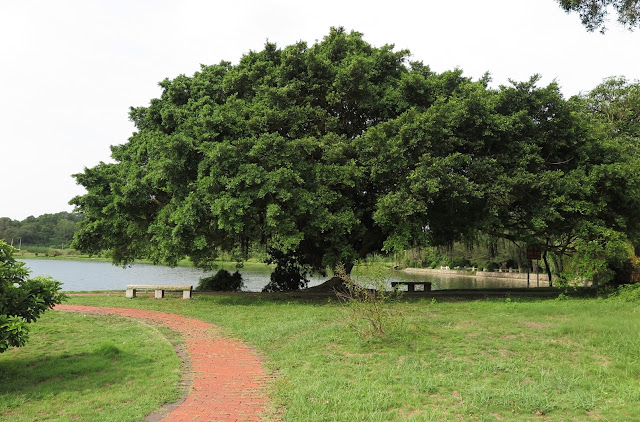 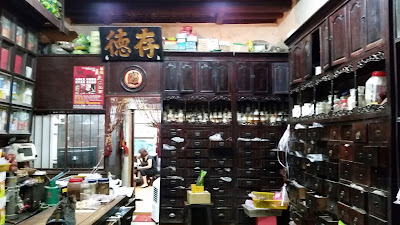 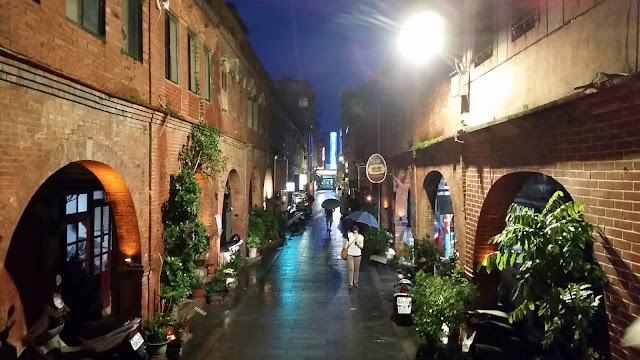 Lane in the village of Jincheng, Jinmen 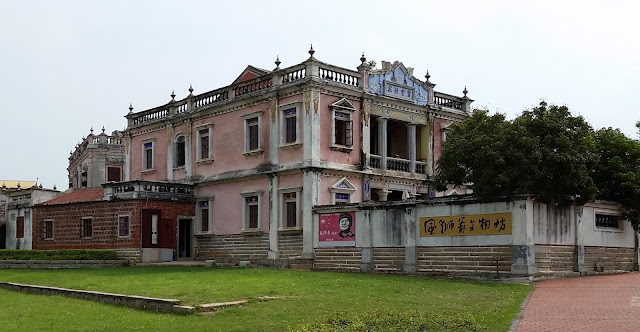 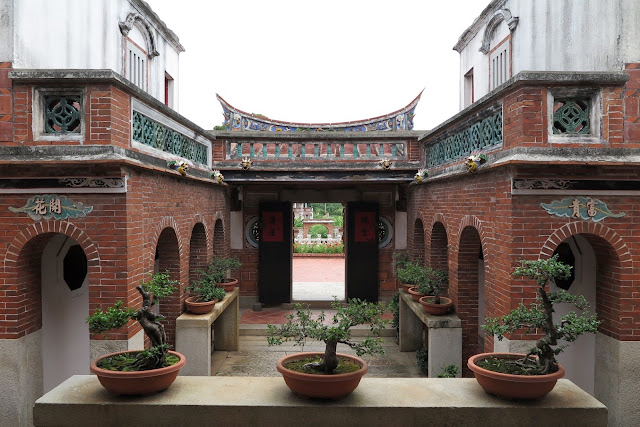 Leaving the bucolic sites of Jinmen (almost empty tourist sites, winding country roads with no other vehicles in sight) juxtapose with the chaos of arriving at the mainland Chinese port of Xiamen following a brief ferry ride from Jinman.  Our hotel reservation on the mainland was for a resort on the small island of Gulangyu, a stone’s throw from Xiamen, but only accessible by ferry from a different terminal from that of our port of entry.. We went from our Jinmen ferry terminal to a second terminal by careening taxi only to find that all tickets to Gulangyu were sold out.

View of Xiamen from Gulangyu

A wizened Chinese woman plucked at my sleeve amidst the throng and asked in a melange of English and Chinese if we were trying to get to Gulangyu. For a fee, she would guide us there.  I motioned to Grant to take over the negotiation. In the end, we put our faith in her. She led us to a taxi for another hair-raising ride to a third ferry terminal where we were able to make the 10 minute crossing to Gulangyu.  Before we parted, we arranged to meet the woman a day later for the return ferry to Xiamen and then on to the second ferry which would take us back to Jinman and then to the flight to Taipei.  All of this was up in the air — would we be able to make two ferry connections and the flight back to Taipei before the next predicted typhoon? Stress! Flights between Jinman and Taipei are notorious for being disrupted by weather delays. 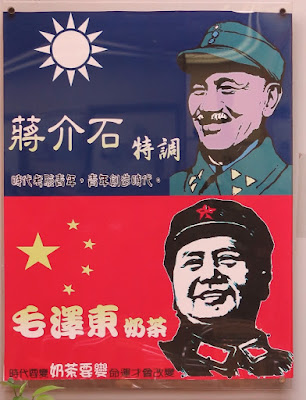 Gulangyu as an island suburb of Xiamen was a once charming settlement of European colonial architecture, wide beaches, and forested paths up and down the hilly contours of the island.  Xiamen had been one of five treaty ports established by the Treaty of Nanjing (1842) that opened China to European trade and influence, and Gulangyu was the neighborhood of choice for European embassies and residences, many of which still exist as shadows of their former selves. 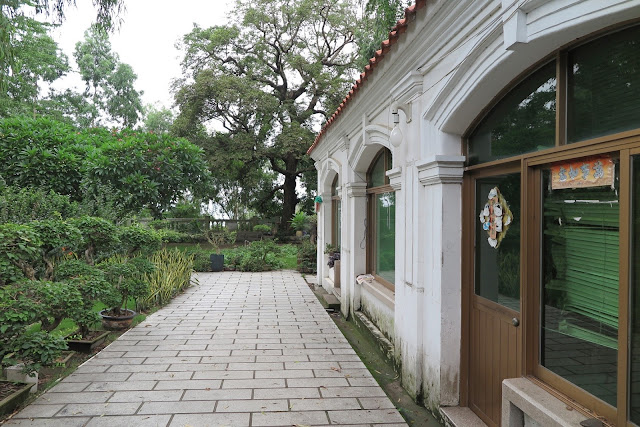 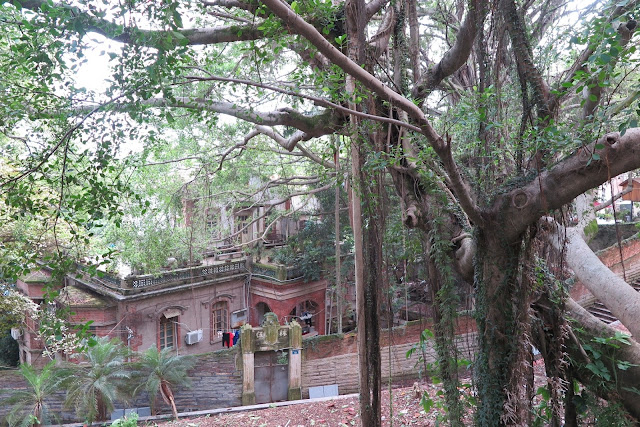 Vehicular traffic is prohibited on Gulangyu, but it is now overrun with large numbers of Chinese tourists for both overnight and day trips from the mainland.  Getting through the crowds at the sites and villages is a challenge, and the beaches now look across the water at huge industrial installations on the mainland.  The crush of people, the odd odors wafting from seafood stalls, and the oppressive heat and humidity make for an intense stew. 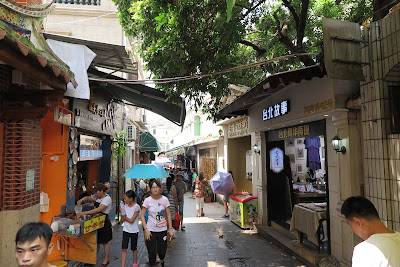 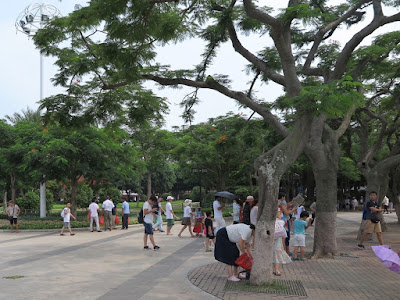 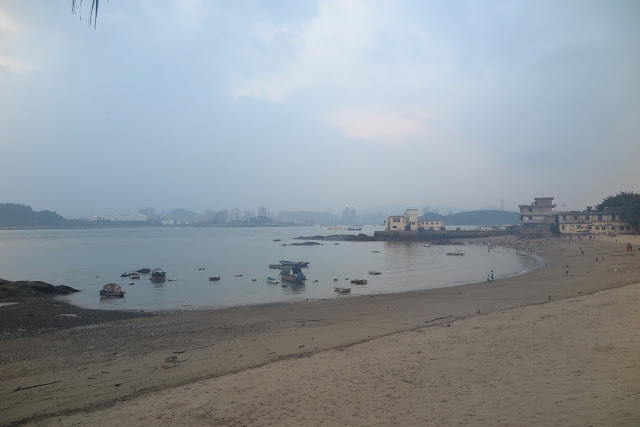 Gulangyu beach with China’s mainland across the bay 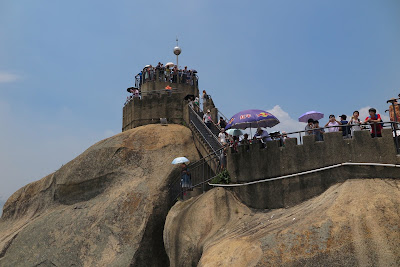 Sunlight Rock, the lookout at the peak of Gulangyu 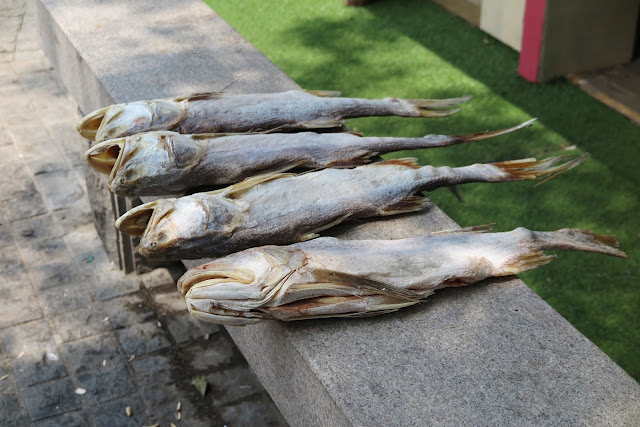 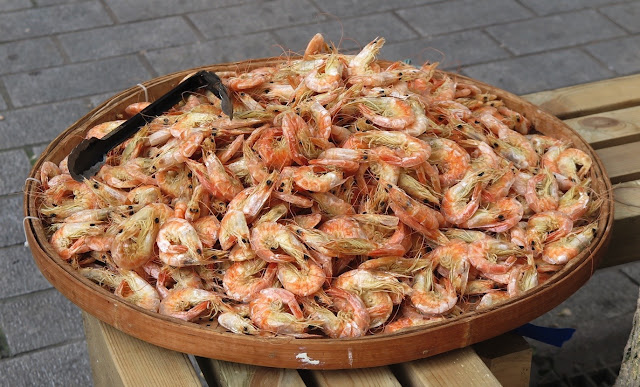 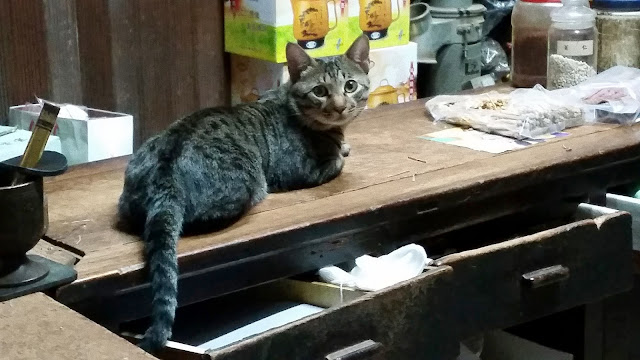 Why am I in this food picture?!

We cut short our visit by a day due to the dire typhoon predictions, and while it looks like the storm will side-swipe Taiwan, I was happy to get back to Taipei.

One thought on “Taiwan to the Mainland: Across the Straits. (Another Typhoon?)”