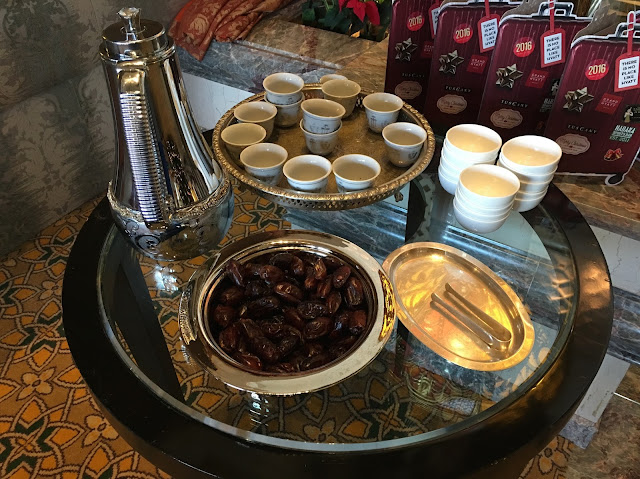 After an upgrade to first class on Emirates (very cool) we land in a foggy, blustery Dubai where the tallest buildings are hidden in cloud cover.  The airport is massive and we scamper through terminals trying to find Oman Air only to wait on the tarmac for two hours.   In typical American impatience and quest for efficiency we are huffing with indignation while all around us sit complacently – including the women with many screaming children. Jetlag slams into us.  Finally we’re off for the short flight along the Persian Gulf coast to Oman at the southeast corner of the Arabian peninsula — the apex of a triangle between Arabia, India and East Africa (Zanzibar) and showing strong influences of each.   Sash picks us up – I can barely find his gringo face in the long line of south Asian men (and only men) waiting outside the international gates.  I start to laugh at the wide-eyed crowd, and they, good-naturedly, laugh back.  We are delighted to see Sash who takes us to the Hyatt and D. crashes after 20 hours of travel while Sash and I roam the enormous beach at low tide.
Muscat is a low-key, white-washed, orderly and clean city with decent roads and good drivers – none of which I have experienced elsewhere in the Arab world.  It’s very modern – dating mostly from 1970s or when the current Sultan (hereditary absolute monarchy – aka benevolent dictator) took over in a palace coup from his father.   There are certain benefits to dictatorship with a velvet glove (think Singapore) as Oman has escaped the scourge that has embroiled its northern and western neighbors.  As a gulf country it is utterly dependent on oil, and in a time of plunging prices, all bets are off.  The sultan has produced dramatic and high-end public works – The Great Mosque; the only opera house in the Muslim Arab world, a brand new national museum, several gleaming government buildings  — beautifully designed, architected and built.  (Contrast this with the decrepitude of Cairo).
The old city, built around a natural harbor in which sits the Sultan’s enormous yacht (the size of a cruise ship), is hemmed in by mountains and the remnants of Portuguese forts from the 1500s.  The souk is mostly for tourists but always fun to walk around.  One stall is manned by old African women who may have once been slaves (banned in 1970 but continued to exist for years afterwards.) Oman ran much of the East African slave trade for centuries, and it shows in the local population.  There are stories of wealthy families who have stayed in contact with their former slaves and bring them to events at which they prominently serve guests to remind people of how wealthy they once were. (The former slaves are now paid just like anyone else.)
Oman practices a unique form of Islam — Ibadi – Sunni with a modern conservative outlook.Most women are covered in black Abayas and most men wear white Galabiyas with either turban or fez-like white cap – heritage of Zanzibar.But women are leisurely covered and their Abayas sparkle and twinkle with sequins and lace.Headscarves often let hair escape and women are very made-up, showing flashes of ankle, dresses, and fancy shoes.Men and women mingle easily and there are no hard “what-are-you-doing-here” stares as I have often received elsewhere in the Muslim world.In general, and very much on the surface, it seems pretty low-key and laissez faire, but who knows what lies under the surface?
In the early evening the beach is taken up with endless soccer games.At lunch, all along the boardwalk groups of women and children set out carpets for picnics under the palm trees.White-robed men sit in outdoor terraces drinking coffee. Clusters of dark-skinned south Asian men (all young) sit in groups eating and waiting for their next job pick-up.The country’s population is 4 million and an estimated 600,000 guest workers from the subcontinent keep the country going.
Pictures of the sultan are everywhere – posters on buildings, shops, banks, painted on cars.Big brother is definitely watching – benevolently or not.
Muskat reminds me of Rabat, Morocco with a bit of Palm Springs plus ocean.  I am surprised that it isn’t more of a warm weather tourist destination – the climate in Dec, Jan, Feb is perfect – balmy, sunny, not too hot.   At Christmas the hotels are all booked with Brits, Krauts and a smattering of French and Italian.  I hear no American accents at all. 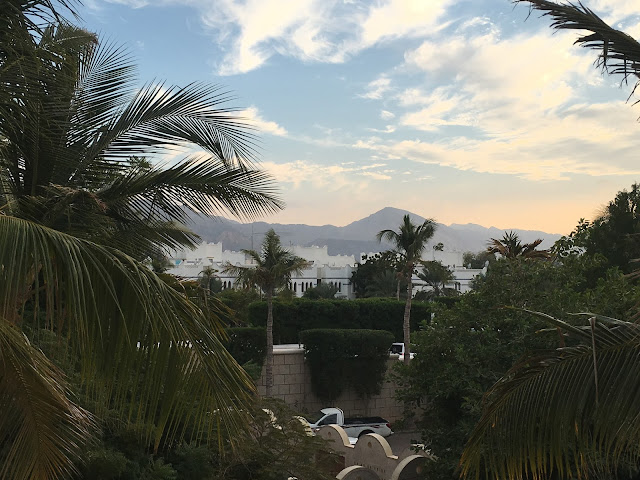 View looking out to the Al Hajar mountains from the Al Qurum beach Hyatt Hotel. 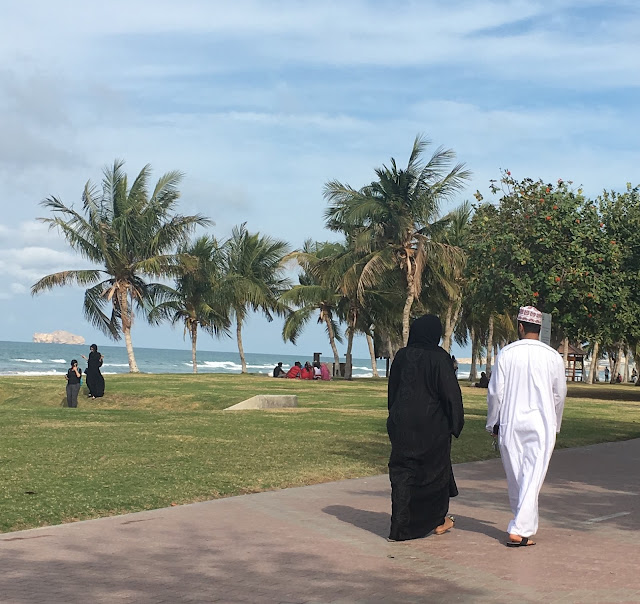 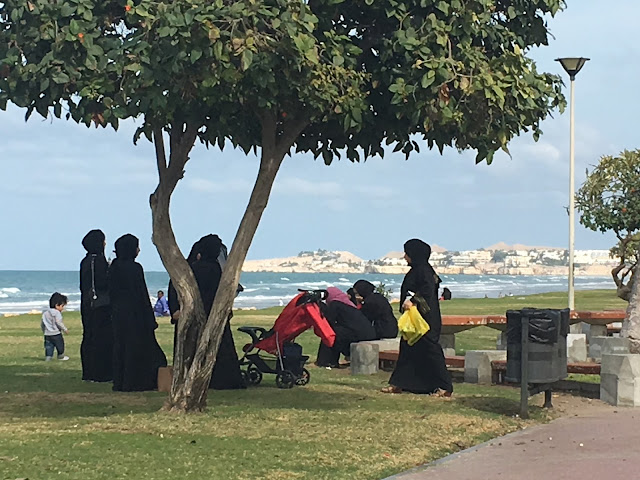 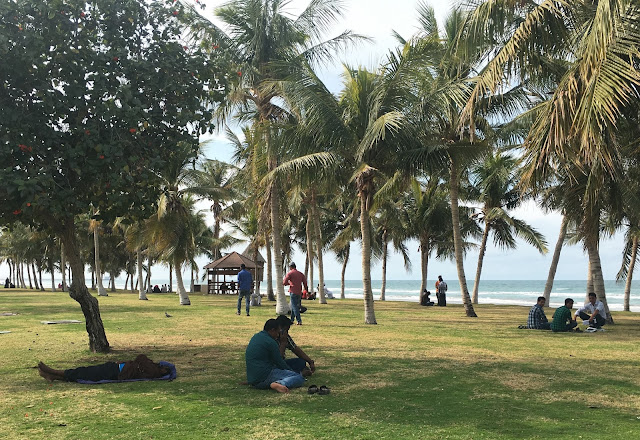 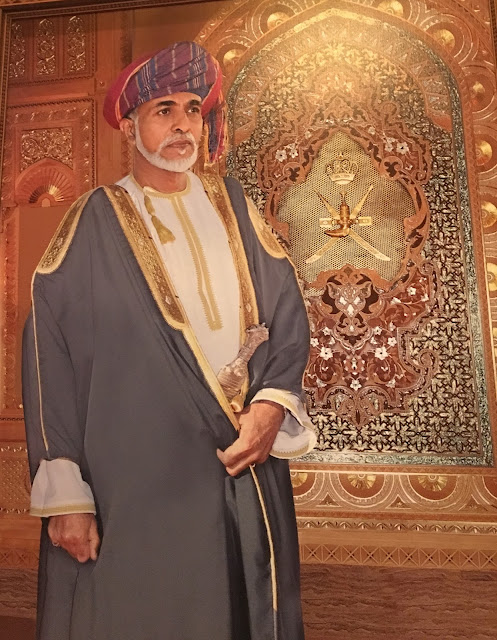 Sultan Qaboos beaming down from everywhere… 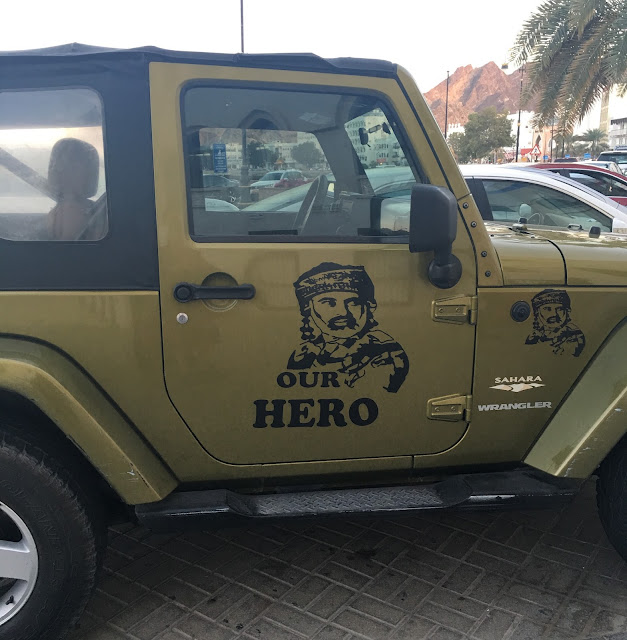 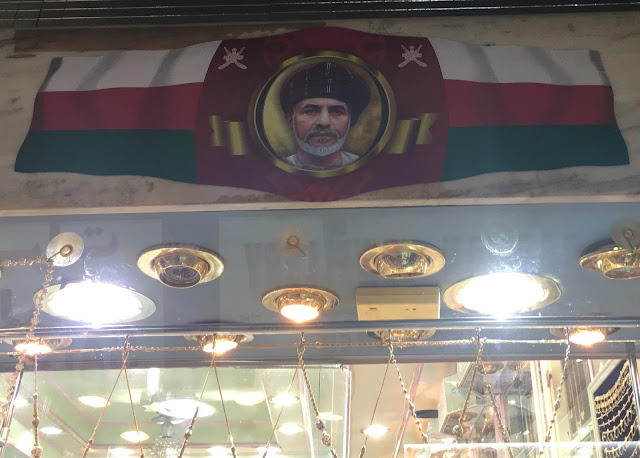 Watching over the souk 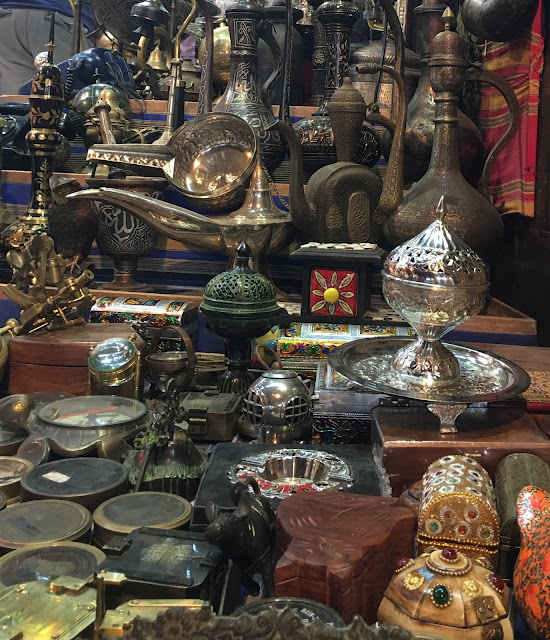 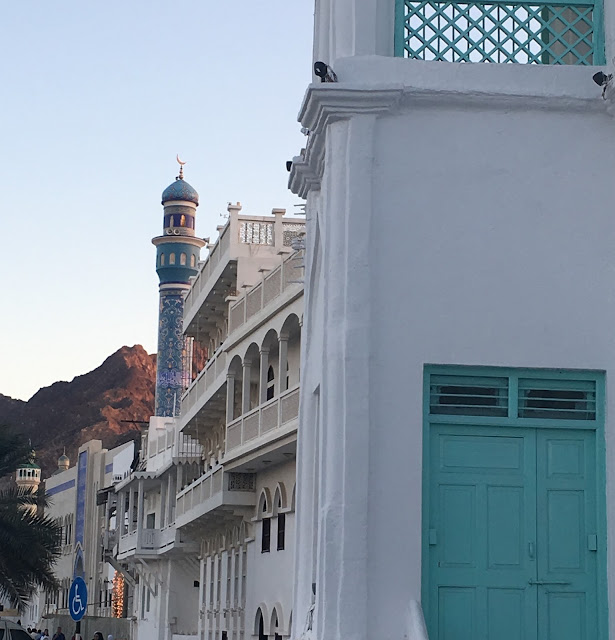 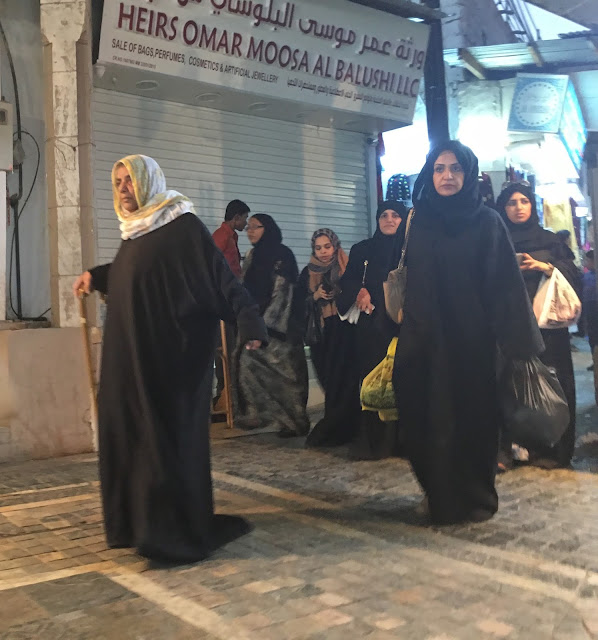 Into the souk… prayer time. Men disappear. The muezzin calls are live (not recorded) from the minarets. Most of the shops are managed by south Asians and stay open during prayers. 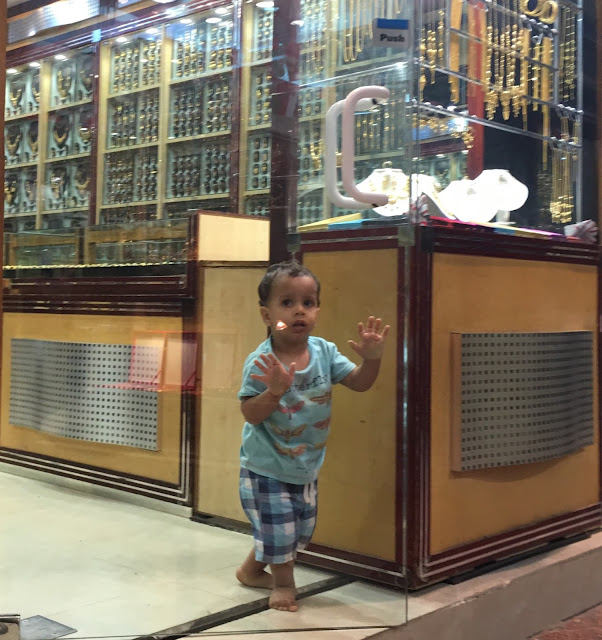 Let me out of the gold souk, please! 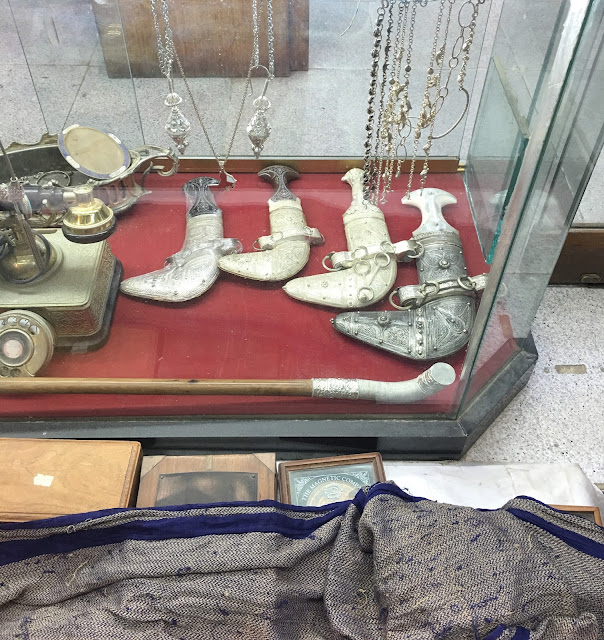 The ceremonial knives carried by all Omani men on official occasions. 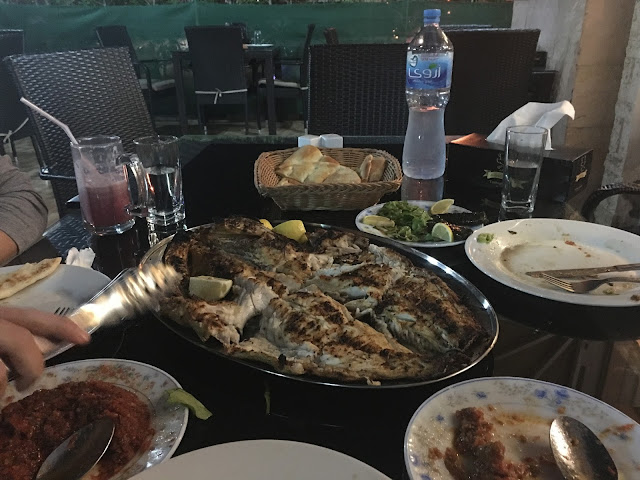 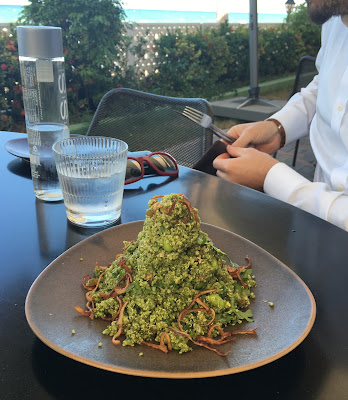 Yum. On the terrace at Slider Station – an excellent fusion restaurant. This is a green quinoa salad with pistachios, arugula, spinach and crispy onion. Blue, blue ocean beyond. 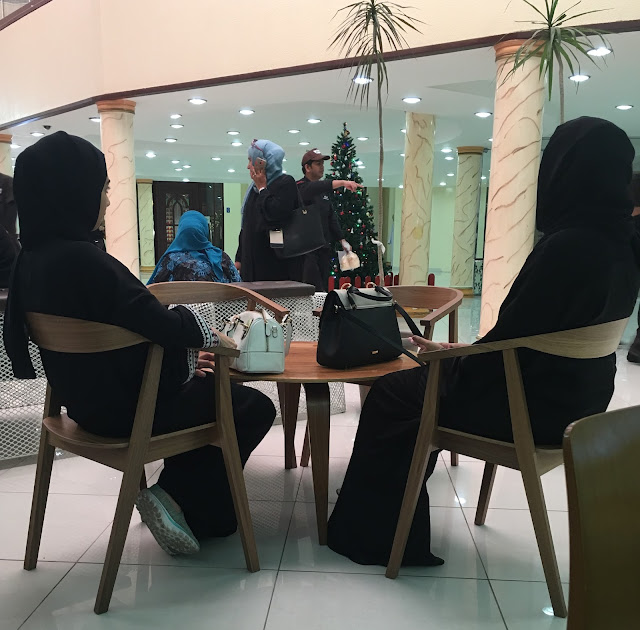 Bookends in the mall. Note the Christmas tree. 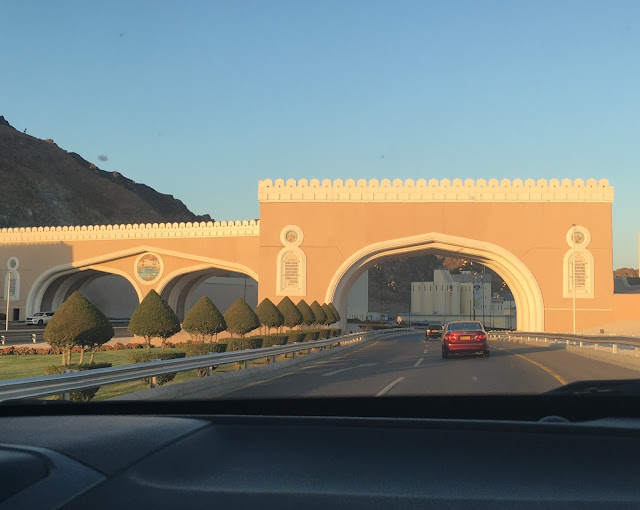 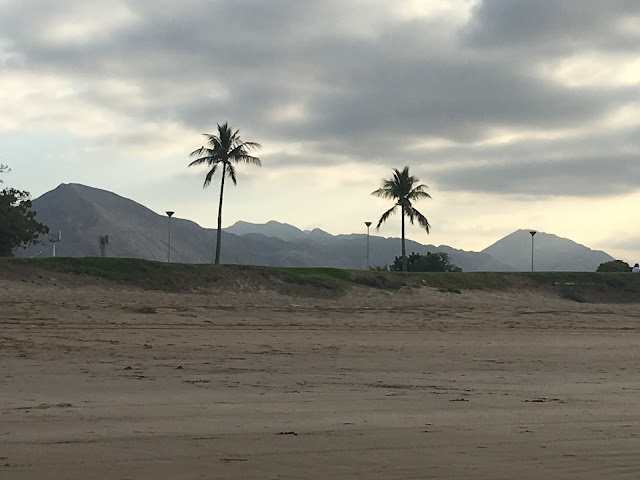 Beach at low tide in the diplomatic quarter. 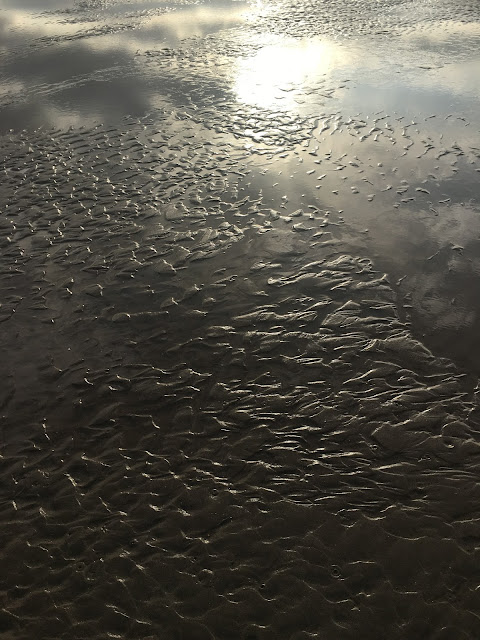 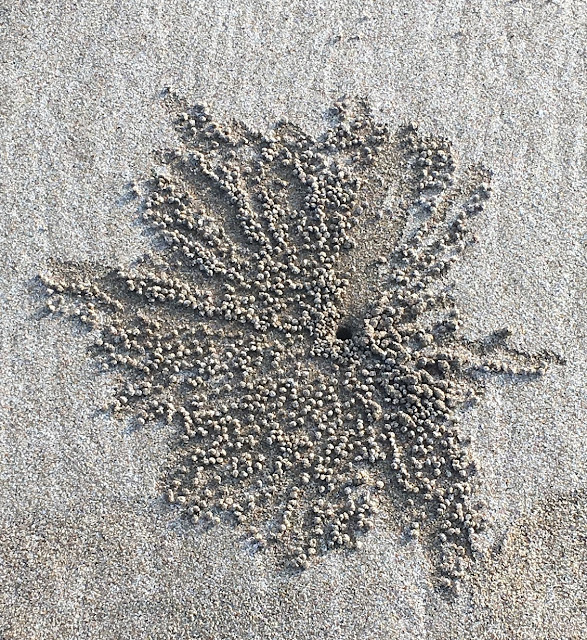 These delicate sand structures emerge at low tide, created by some tiny sea creature.
They are everywhere. 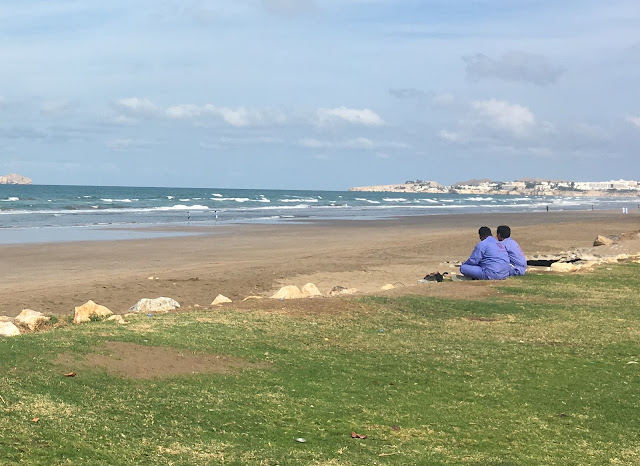 Very far from home. Guest workers from Bangladesh sit on the beach at lunch looking out over the Indian Ocean.