January 26, 2013October 7, 2016 EB LandeBurma/Myanmar, Travel
The Kayan Women of Kayeh State (bordering Thailand) have traditionally worn brass neck coils to elongate their necks (actually shortening the rib cage by pressing down on the clavicle starting at around age 8).  The practice is largely abandoned and discouraged, but it remains a part of Kayan culture and a source of tourist income, especially in the refugee camps on the Thai border.  At Inle lake we see a few such women – to me this is like looking at animals in a zoo.  Folks take pictures but I leave the room, mildly nauseous. The coils weigh several pounds and women can’t hold their heads up without them.  (How do you lie down without suffocating? Or cough? Or eat?)
How did the practice develop? No one knows: we hear repeatedly that this made women less attractive to marauding invaders who would not kidnap or rape them.  We also hear that it prevented “tiger bite” (in the years when there were still tigers – gone for at least two generations).  Actually the role of rape as a motivator for all kinds of things keeps popping up: Thai/Burmese border violations, the treatment of the ethnic Rohingya people of Rakhine State bordering Bengladesh. These are Muslim “gypsies” evidently hated by pretty much everybody – Burmese, Rhakines, Bengals (they originate from Bangladesh).  They have been much in the news the past 6 months – in part just because there is now news from Myanmar, and because there is quite a refugee crisis afoot – affecting up to one million people living in camps or set adrift out to sea on the Bengal border. (Hmmm one million Muslim refugees and no one gives a damn. Let’s see here…).
The reason we are given is that two Rohingya boys raped a Rhakine women last June. (Oh, that explains it.)  Perhaps this is a feature of a recently reformed police state – or perhaps it reflects a universal belief throughout the country that it’s OK to hate Rohingya – even if you yourself are part of another persecuted ethnic minority — at least everyone gets to hate someone even less favored.  Buddhist monks in Rangoon have staged protests and rallies in favor of expelling the entire Rohingya population.  So much for the gentle truth of Buddhism.
Rangoon reminds me of old Havana – a falling down dowager in the tropics with gorgeous bones long neglected.  The Brits pulled out in 1948 and time pretty much stopped: Some buildings still have unrepaired damage from Japanese and US shelling in WWII.   Other colonial buildings were either severely damaged in earthquakes (1975) or Cyclone Narvis (2008) or  abandoned altogether as the national government moved in 2005 to its new capital called Naypyitaw (and off-limits to tourists).  Evidently the people dragooned to build the place succumbed in droves to malaria and viper bites. The remains of the military regime have built enormous villas and barricaded themselves in the largely uninhabited capital. 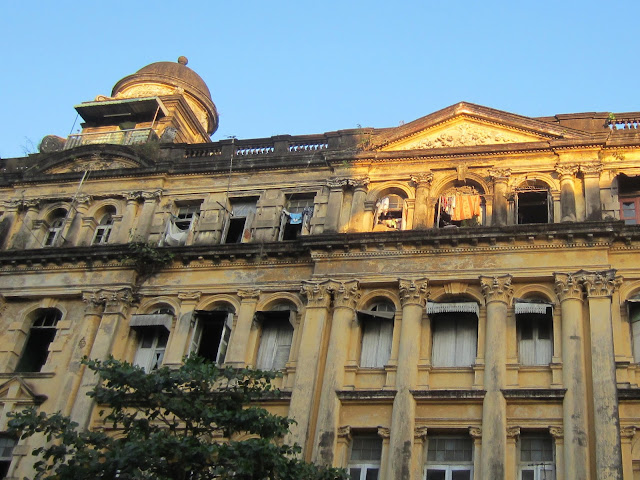 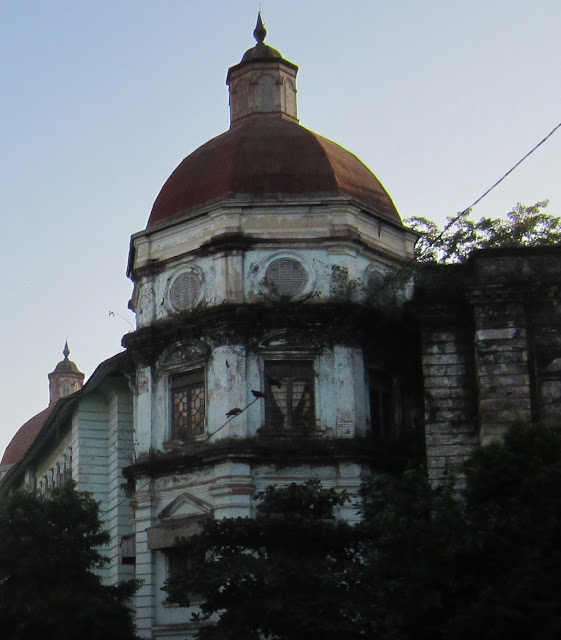 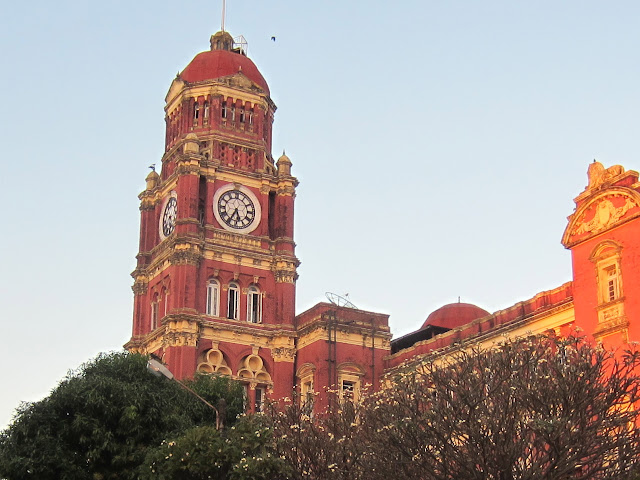 One of the lakes in central Rangoon contains a “royal barge” comprised of two enormous gold dragons built by a former general for himself and looking like a Disney reject – absolute power not only corrupts but it also makes you think you have great taste. 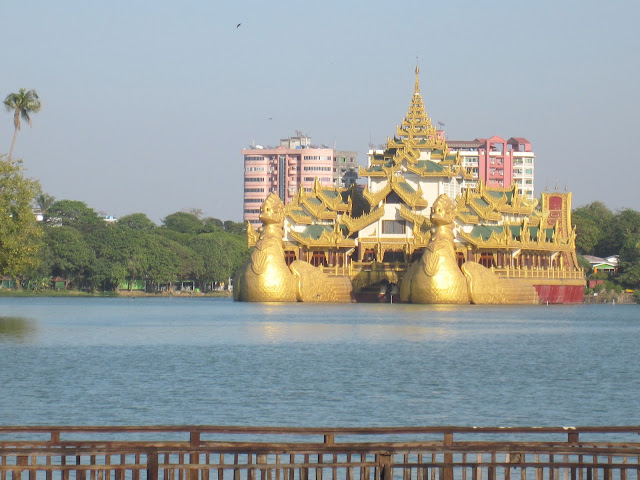 The 120+ decrepit colonial buildings in Rangoon, designed and built by the same architects who designed colonial Bombay, are under some sort of protected historic zone, and hopefully they will be restored and returned to use, although it will take years and big bucks. It would also greatly enhance tourist sites in Rangoon, which is otherwise spread around several large and beautiful lakes with wooden pedestrian bridges in the midst of a decaying old city, an ugly riverfront port area (also prime development potential but currently really scary-ugly), several new building projects (not yet really ugly but it could happen) and “suburban” neighborhoods, many of them villas.   The old Scott market – probably the equivalent of a department store, currently selling everything from jewelry to dry goods, is one of the few examples of colonial buildings functioning and restored. 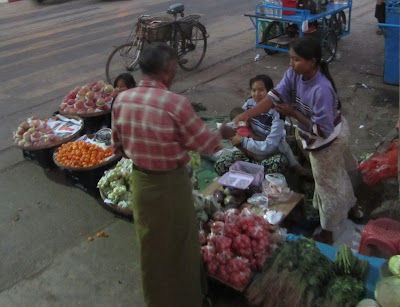 Life is lived on the streets of Rangoon and most “restaurants” are simple stools on the sidewalk with food cooking on a nearby hotplate and produce sold from the storefront next door.  We watch a young girl attach a basket to a hook, yank on a chain outside a door, and wait while someone several floors up hauls the basket up to the window and brings it inside. 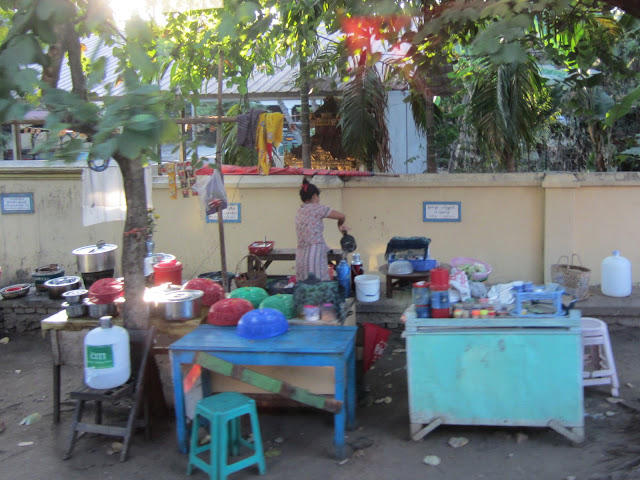 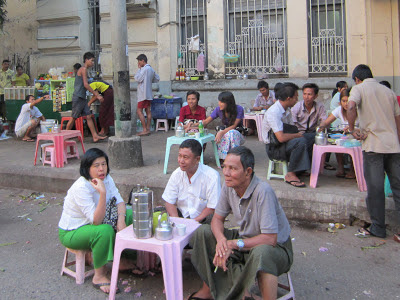 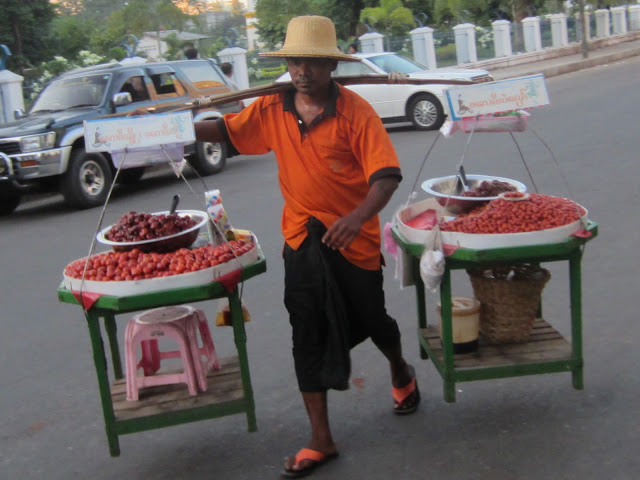 One morning we run into a traffic jam (no motorcycles allowed in Rangoon, but a flood of second-hand Japanese cars is starting to clog the streets) caused by a bus accident.  The bus has completely overturned and people are trapped inside. There is no ambulance, no one is running to help. A few militia stand around. People talk into their phones.  A normal occurrence.  We weren’t sure it was an accident – maybe the bus just fell over from exhaustion? No, we are assured, this is just the way life is. There are no emergency services. Or insurance.  It’s all chance and fate. 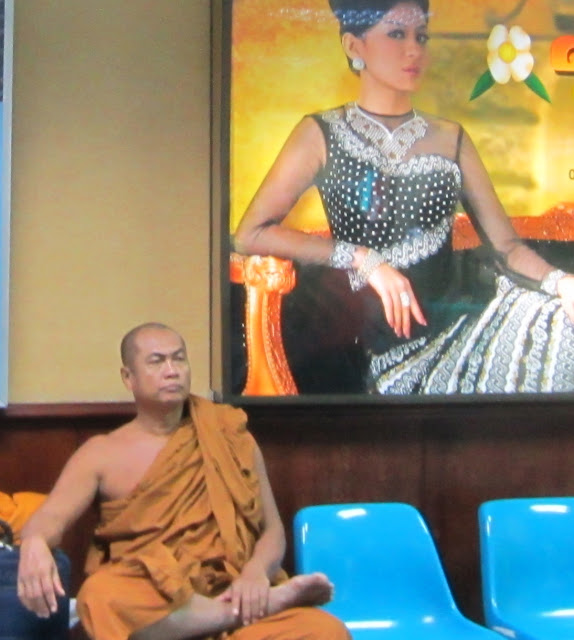 We happen to be in Rangoon on a Friday night, and as a primarily Jewish group, we have made arrangements to spend Shabbat at the only existing synagogue, Musmeah Yeshuah, founded over 100 years ago by Iraqui Jews largely from Baghdad.  There are only between 14 and 24 Jews left in the country and the synagogue is maintained and run by Yangon native, Mr. Moses Samuels whose son, Sammy, lives in NYC and runs a small, successful Myanmar travel agency called Myanmar Shalom (no kidding).   On the night we are there, several people have shown up from Israel, Canada, Britain and the US, and Sammy is himself in town and runs the Kabbalat Shabbat service.  He tells us that this is the first time they have had a minyan (10 men – a quorum for a religious service) in 8 months. 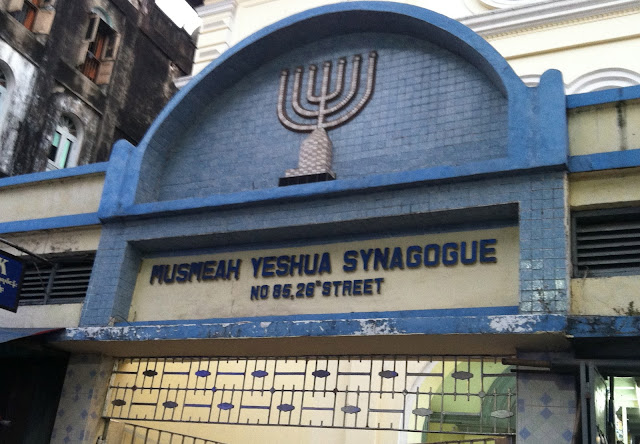 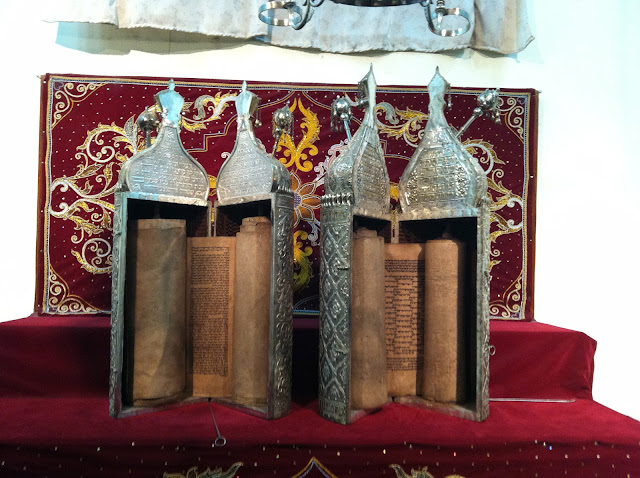 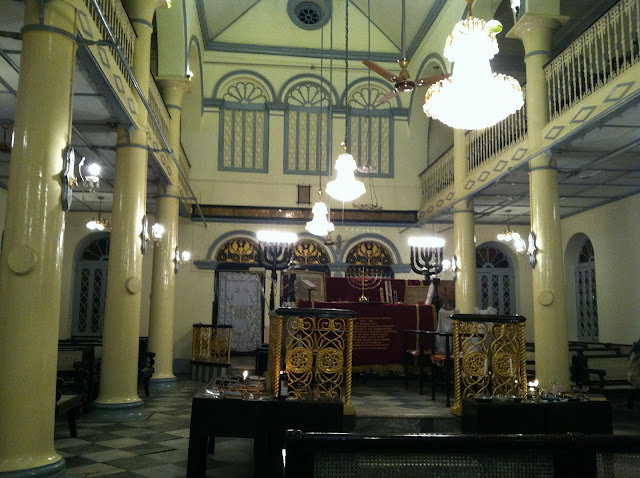 Ironically, the synagogue and the former Jewish quarter is currently a Muslim area (8% of Burma is Muslim and we are told that everyone gets along just fine.) I see no signs to the contrary.  We walk several blocks through a very poor Muslim area to the old Jewish cemetery (behind it is a minaret) and everyone looks pleasantly and shyly curious – nothing more.  We are told that the muslim population is native but the hijab looks Malay or Indonesian to me.  Evidently Islam arrived with many of the Indians who once ran shops and controlled much of the commercial life of the city. 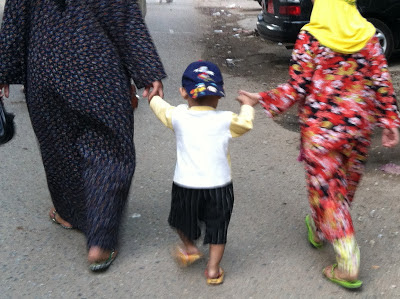 The cemetery is silent, overgrown and powerful. The names are in Hebrew and English and cover 1900 – 1950s with a few more recent dates.  We meet the caretaker, who claims he is Jewish, and looks as though he could be living in a shack next door.  It’s a very poor area.  The cemetery is on two levels, the first level maintained and walkable, the upper level very overgrown.  I ask if we can go into it and am told that it’s not a good idea.  Might be snakes. 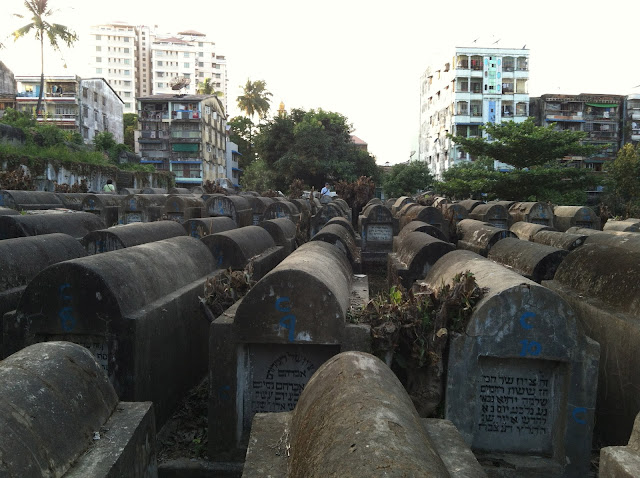 I am sorry that we haven’t had more time in Rangoon. We spent the first two days of our trip here, mostly in complete culture shock, and by the last day, at the end of our trip, I was much more adventuresome and ready to plunge off on my own.
After the lengthy trip from Rangoon to Bangkok to Tokyo en route back to the US, we are held on the tarmac at Narita/Tokyo waiting for take-off.  It’s always a shock to leave the color and chaos and vegetation of the tropics and land back in northern urban grey winter.  It’s raining outside and the ground crew finishes up and backs away from our plane as though they are performing a ritual. They stand in a straight line waiting, then as if on cue, bow deeply and identically from the waist. They step back in unison again and bow twice more —  once to the pilot and once to the plane.  Then they all raise their right hands to the same precise height at the same moment and start waving rhythmically with the same motion, like a metronome.   It was one of the most moving and mysterious things I’ve seen at an airport.  Like Kabuki performed by men in work boots.
I have a last Bento box on the Japan Air flight in which I did not recognize one single life form.  Could have been jello, or mushrooms, or eyeballs — beautifully presented but food from a parallel universe — sort of like eating blindfolded where you have no preconception of what’s going in your mouth.
As first world-ers we are so spoiled: the Burmese were gracious and extremely generous in presenting us with their best food in huge quantities (which we could not possibly have eaten).  As older folks (ahem) many people had dietary issues and did not hesitate to let waiters know about them – not that they understood a word:
No spice — I mean NO spice, not even salt. Is there MSG in this? Can I just have rice? I don’t eat shrimp. Or pork.  What kind of fish? Are there bones?  I said NO spice. I’m allergic to peanuts. I can’t eat this. I’m on a diuretic. Is the water boiled? Boil it again. Make sure there’s no salt.
They get the last word. 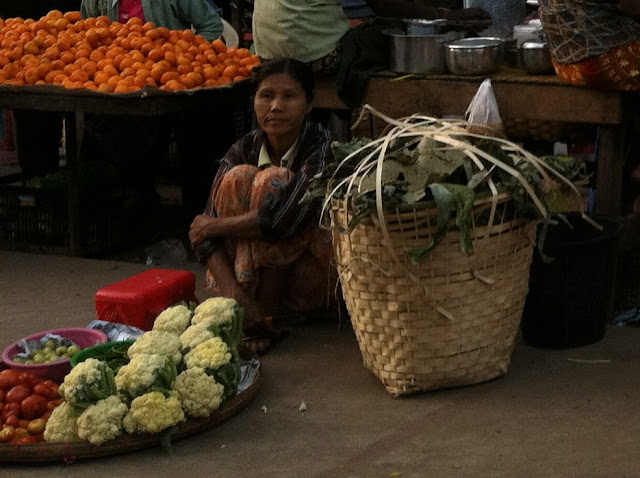 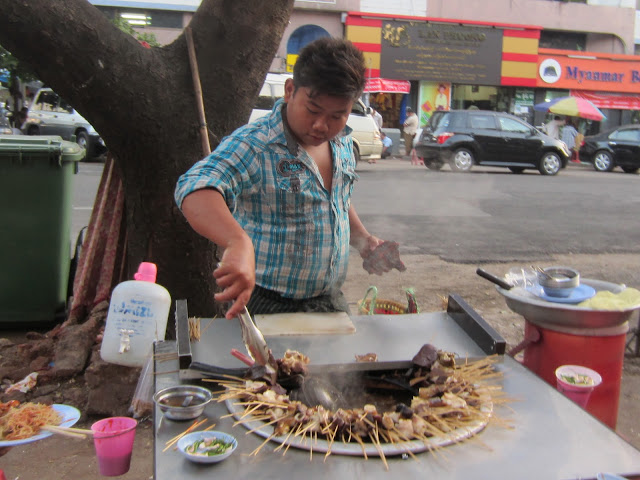 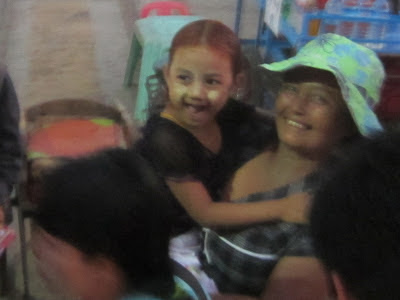