Burma is a very Buddhist country. There are monks everywhere with shaved heads, sienna brown robes and mustard shoulder wraps. There are nuns everywhere as well – looking exactly like monks except in pink robes.  Basically, if you want an education, you have to spend years in a monastery with no hair.
We visit a monastery with over two thousand students – they line up separately for the noon meal, youngest (6-7) to oldest (15), waiting calmly, no pushing, no shoving, no talking.  It is an honor to feed the monks and they can’t be refused because you will earn merit in the next life.
Boys must go out every morning with their alms bowl and collect their food for the day. Girls may not, and live on whatever charity their monastery can muster.  Both eat only two meals a day – one on early rising and the last meal at noon – eaten in silence.  It is depressing to watch these children in their silent lines – most of them from agricultural families who bring them to the city to be educated (and fed).  They go home once a year for the summer months of April and May.  It occurs to me that shaved heads do not spread lice.  We donate lots of cash to the head nun for the girls and hopefully have fed them for at least a week.  On the way out I pick up a notebook belonging to one of the girls that has fallen from a window.  The cover is decorated with pictures of Taylor Swift with her cascading golden hair. 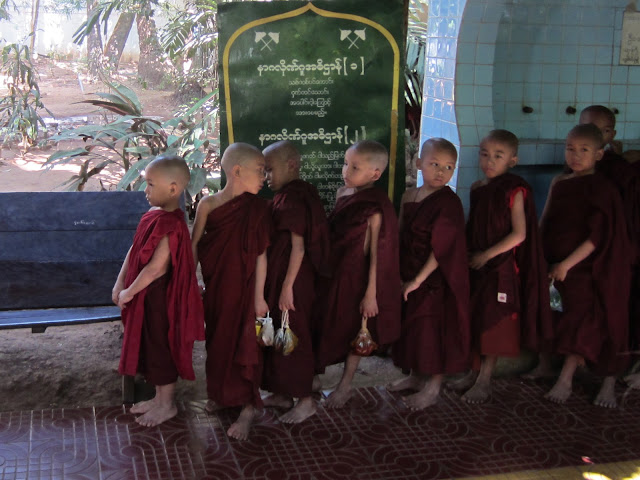 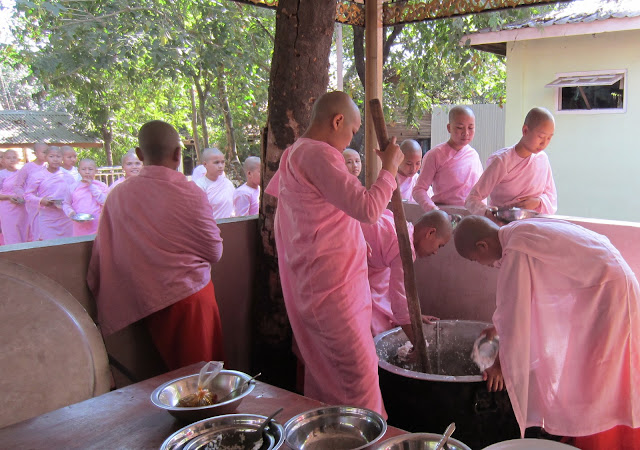 I wonder about a society that puts faith in a Buddha who is either meditating, reclining, staring off into space or awaiting nirvana. I wonder about people who are having a hard time in this very real life, but who put it on hold so they can build good karma in one of several future lives.  This could not be more opposite to western cultures, at least those based on the Hebrew and Christian bibles. God helps those who help themselves.
P.S. The worse karma you can have as a Burmese is to be reincarnated as a dog, and when you see their dogs you know why.  Mangy, hobbling, skinny, with teats dragging on the ground after endless litters, unclaimed and certainly un-neutered.  “Pariah dogs”. They look like they all descend from one pair of Australian dingos – but are thankfully not aggressive.
Much like the Catholic churches in Spain and all their new world progeny, where gold drips from every item while the people are starving, Buddhist statues in temples are garishly turned out in gold, wearing make-up, with offerings, neon lights, flowers, altars, incense.  Several Buddhas we see in our travels have endless applications of 22 karat gold leaf applied to them daily (men only, please) to the point where the original Buddha shape has disappeared and the statue resembles the Pillsbury dough boy morphing into the Michelin man in solid gold.  It just leaves me shaking my head. 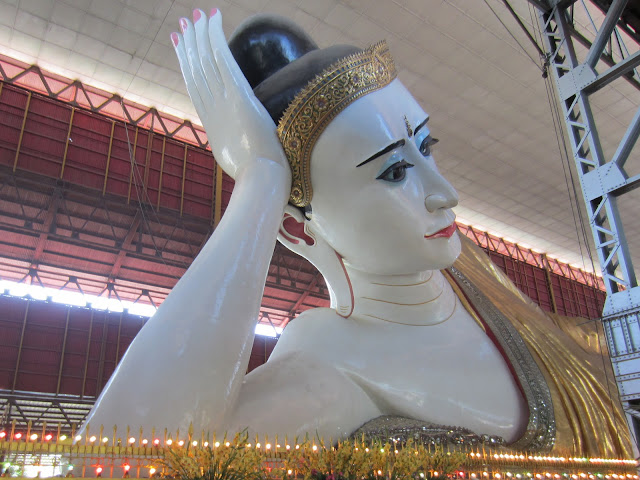 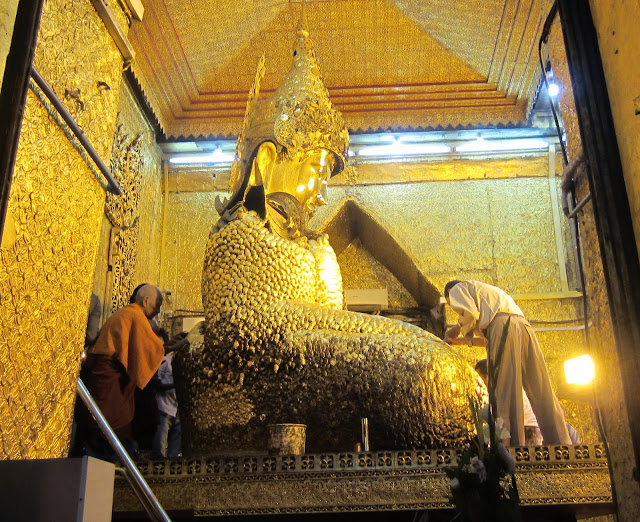 There are temples everywhere you look.  The extraordinary Shwedagon pagoda, beating heart of Rangoon and one of the three most important Buddhist shrines in the world, is flat-out astonishing.  Built on the highest point in the city (and used by the Brits as a fort – that will certainly earn you the love and respect of the people) you enter by either climbing many stairs (ascending) or by elevator. Once on the pavilion terraces (barefoot on marble) you wander in and out of many many side temples all built around the enormous gold, bejeweled stupa at the center with its diamond topped spire  A stupa is a solid shrine often built around a relic – a hair, a tooth of the Buddha.  You know it’s a stupa by its shape and because it has no doors – no interior at all. 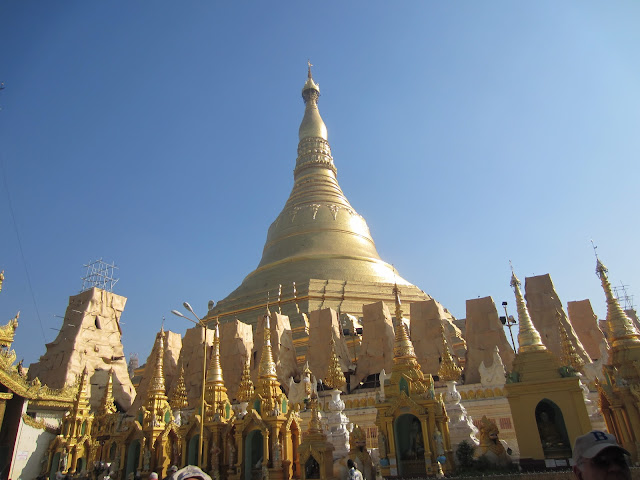 Around the stupa are located 7 fountains according to the days of the week.  You go to the station of the day on which you were born and pour water on the small be-flowered Buddha statue the number of your years.  So, if you’re born on Wednesday and are 34 years old, you go to the Wednesday fountain and pour water 34 times over Buddha.  We are all amazed that people know the day of the week on which they were born.
Similar to mosques, the pavilion is open and airy and people just hang out, sitting on the ground, praying, chatting, eating. Life lived in religious community.  The sun is full out and I am grateful that I am not here in June when it must be baking. 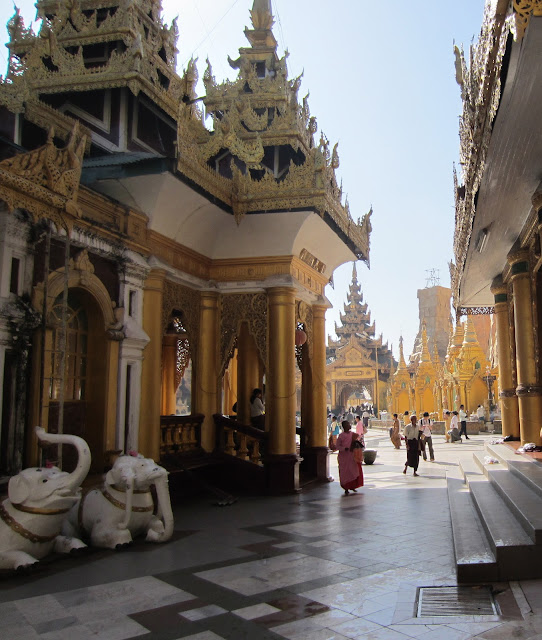 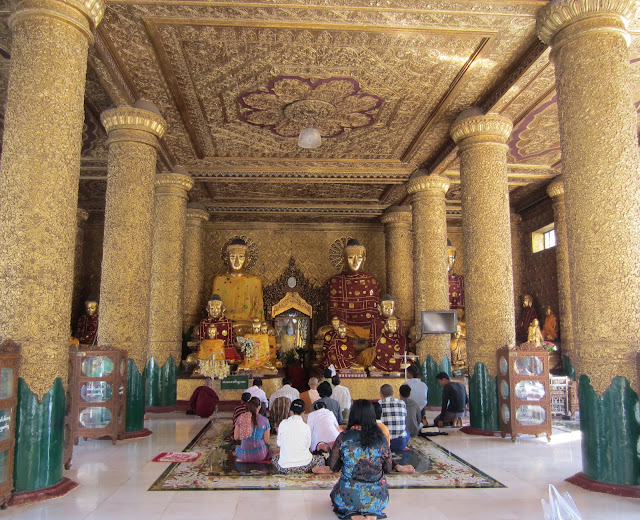 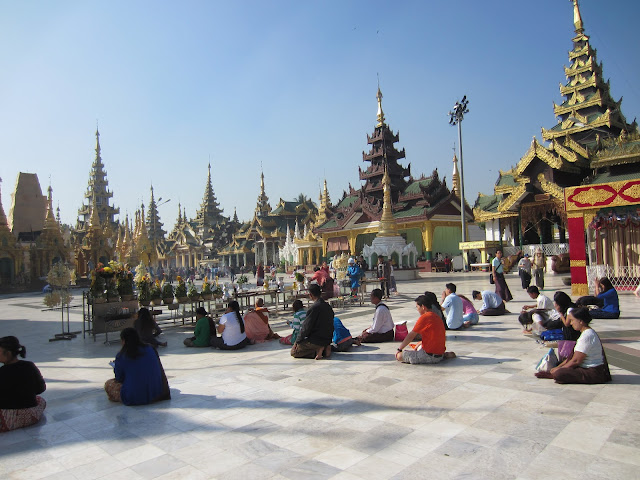 An “alchemist in training”, dressed in white robes with long black hair sits cross-legged on a mat on the pavilion floor, head thrust back and eyes wide open, staring into the blazing sun, looking like a Maharishi wannabe in the East Village circa 1968. He will do this day after day all day long in hopes of becoming an alchemist, which is something between an astrologer and a shaman and apparently highly respected and quite powerful. (Also blind at that point I suspect).
The Lady, The Generals and The Monk
In a fatalistic society where astrology and fortune-telling are the patterns of life, witches live next door and cast spells on your pregnant wife, and mirrors are hung outside to prevent devil spirits or nats from invading —  you can’t make a move without consulting an astrologer. (Where should we build the capital city? Who will run the country? When will I die?)
Unfortunately, if you’re an astrologer to all-powerful generals you’re on a short rope.  Evidently a monk was called in for a consult to the military regime in the mid-80s to determine who would eventually be the “leader” of Burma. He filled his alms bowl with water and looked into it. Pale and nervous at the reflection that he saw, he handed it to a general – who – looking into it also became pale and nervous. And so it went until everyone down the line had seen the image in the bowl – which was, of course, that of “The Lady” (for years her name was not spoken out loud) – Aung San Suu Kyi.   Somehow they didn’t kill the monk, but after The Lady won in a landslide in 1989 she was immediately arrested in order that the prophecy not come to pass. 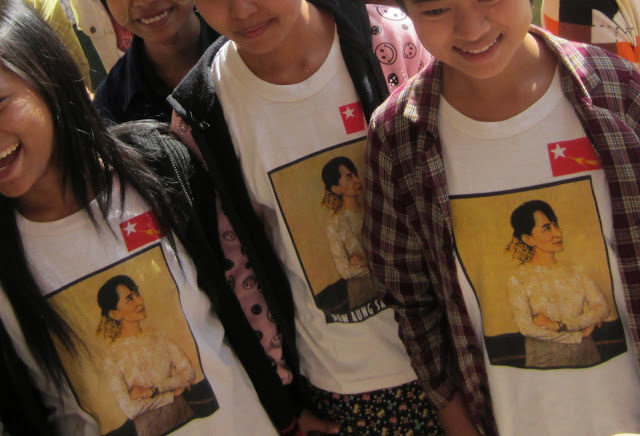 Here the story gets murky. At some point, in the brief time that she was out of house arrest, The Lady met the monk – who was still alive – and he confirmed the story (which must have circulated widely). The monk died at an old age of natural causes, and an astrologer told one of the generals that in order to live long and strong, he must eat some of the monk’s flesh. Evidently the monk was disinterred and somehow the general lived up to his reputation.  Is this even remotely possible, I ask myself?
Astrology, alchemy, karma, disastrous government and tall tales.