Fact or fiction:  The story of eel’s blood (sounds like a Shakespearean curse). A generation ago on Inle Lake, the fishermen grew eels in coffins.  Eels are, evidently, not only a delicious source of protein but their blood, mixed with alcohol, is a particularly hearty aperitif.  The fatter the eel, the better.  And how do you catch a fat eel?  If you live on a lake in a house on stilts and grow vegetables in a floating garden, you bury your dead by lowering the coffin into the lake.  But first, you drill small holes in the coffin – no bigger than your little finger. Small eels swim into these holes and feast upon the recently deceased. The eels, fattened from their memorial supper, are too big to swim out through the original holes. They live in the coffin, continuing to sup, until the body is gone and they are huge.  The villagers haul up the coffin which holds the eels and they get eaten – in a perfect circle of life.  Perhaps this is a cultural divide because every westerner who hears this tale is grossed out. Evidently so are contemporary Burmese;  the practice has been banned for the past generation.

Inle Lake, second largest fresh water body and one of the jewels of the country sits between two mountain ranges and is home to 17 watery villages on its borders occupied by the Intha people, who are also Shan and part of the Shan state. (I can begin, vaguely, to see how complex the pattern of governing can be).  One of the reasons people are rushing to Burma now may be to see the dying way of life on Inle Lake, which – barring some environmental miracle is unlikely to survive.  The water level fluctuates by 5-6 ‘ between monsoon season (Aug. Sept) and the dry months of Dec – May.  There are only a handful of hotels on the lake (many of them beautifully set into the lush surroundings) but you can hear the high rises and golf courses champing at the bit.  A large scar of felled trees and newly broken roads sits on the other side of the lake where new hotels are going in.  In a place where people do not have running water and live in houses on stilts where – I am no engineer but I have a pretty good idea where the toilet waste eventually goes – could be headed for ecological disaster with overdevelopment.  I am dreading a travel brochure that describes Inle’s village of Inndein as the “Venice of Burma.” 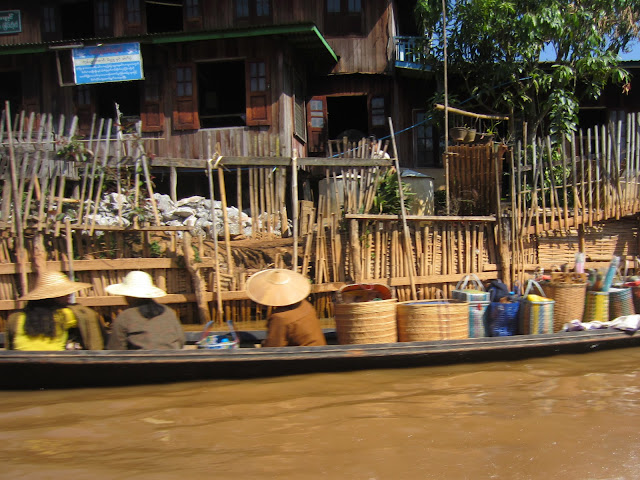 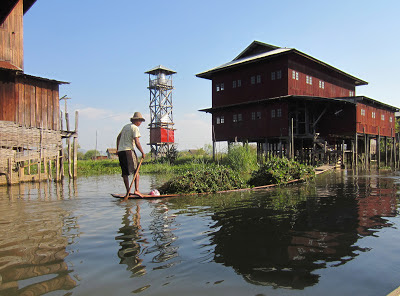 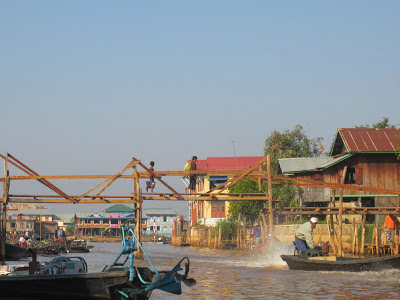 The lake is magical, especially early in the morning as the sun rises above the mountains to the east and the mist rises with it from the lake’s glassy surface dotted with tiny islands and clusters of floating gardens producing abundant tomatoes and beans.  Fishermen in their flat bottom canoes row with their right leg, the oar held in place by their foot, the paddle resting on hip and shoulder. This leaves their hands free to cast nets and then pound the surface of the water to scare the fish into the net.  The water is only about 3 feet deep and we have months of dry season to go.  By May many of the canals dry up and the houses are on stilts in dry land. 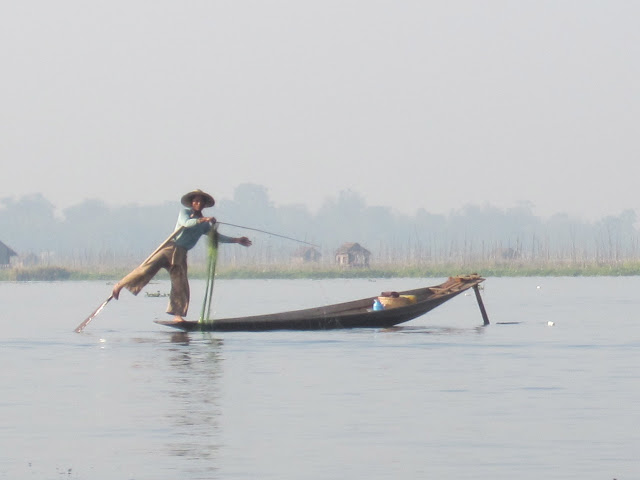 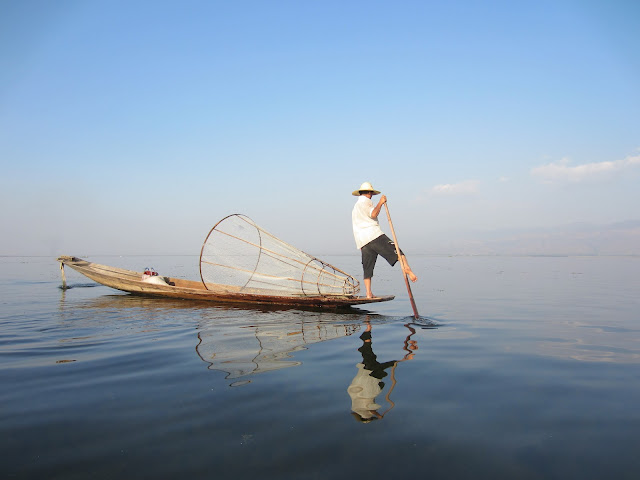 We sit in Auntie Ang’s 100 year old teak house on the Lake, where she has amassed quite an enterprise as local restaurateur, developer and hotelier and listen to her story in elegant, accented English.  She did not marry but has 70 children (her employees) and decided to do so after watching the local women rise before everyone in the family, take care of children, animals, haul water, cook, sell their produce, then massage the husband before he goes to sleep (?).  Much easier to run many businesses and forego the husband and subsequent 10 – 12 children, until recently the average size of the rural family.  Children born in August and September during the heavy rains and mosquito season are far more likely to succumb to malaria and dengue fever as infants.  While I have not seen any mosquitos, I am taking malaria pills nonetheless. If there’s a mosquito within a mile it will find me. 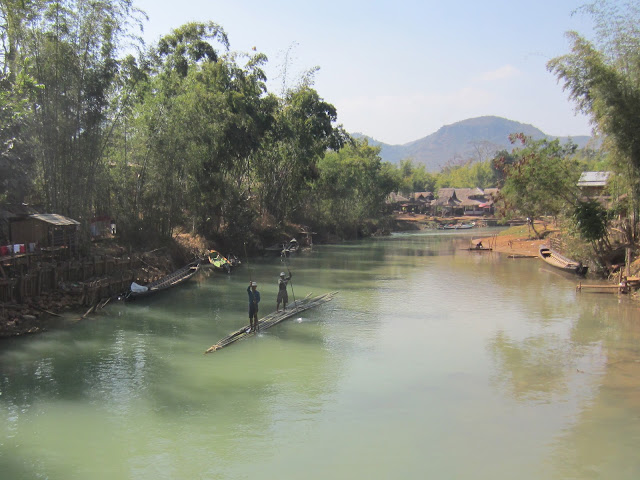 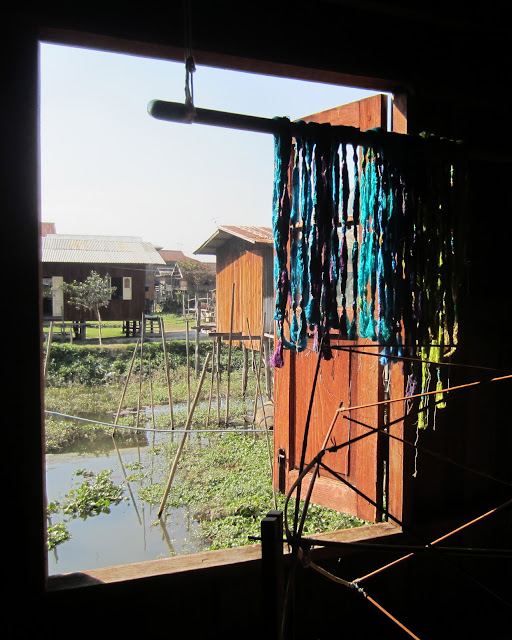 We hike through the village, along the riverbank through a gorgeous bamboo forest to see the ruins of hundreds of small stone and wood stupas, in an ancient (but abandoned) Buddhist site. As usual, no one knows why it was built or why it was abandoned – although the wealth of the nearby lake in producing fish and produce seems to be related. These red, carved stupas under the spreading Banyan trees are the first I have seen reminiscent of Angkor Wat. 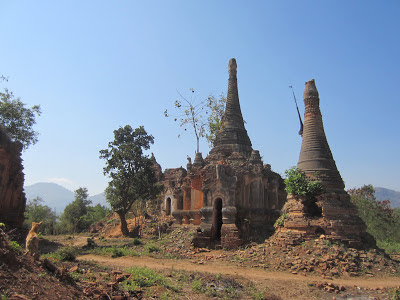 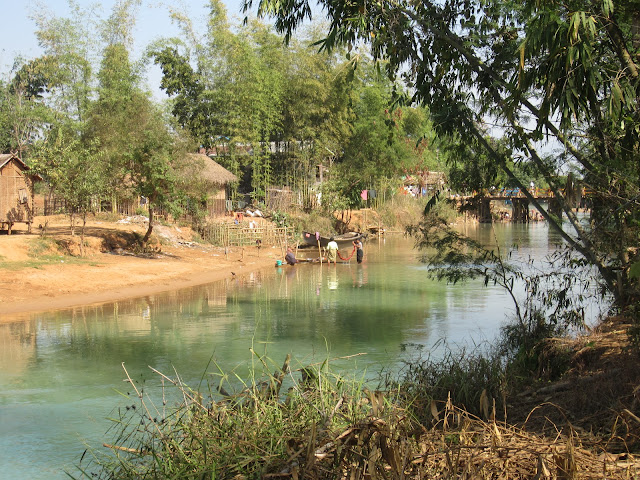 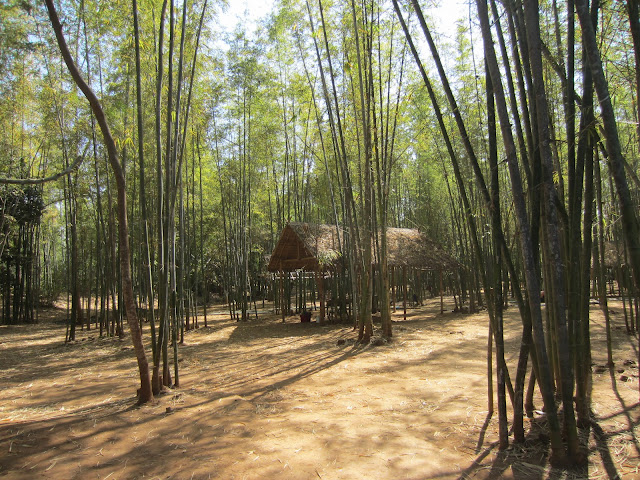 We hear a tale of illicit love under the sacred tree in which the two young people involved were unable to disconnect their private parts, even after several days (I am waiting for the “punchline” – do they turn into a tree?).  But no – this evidently happened much more recently and they were taken to hospital (where?) and the young man’s yongi was cut off.  The moral: don’t screw around under a sacred tree.  As with many of the folktales I have heard, I am lost.  They start off sounding like ancient superstitions and end up as something that happened just last year to someone’s wife. 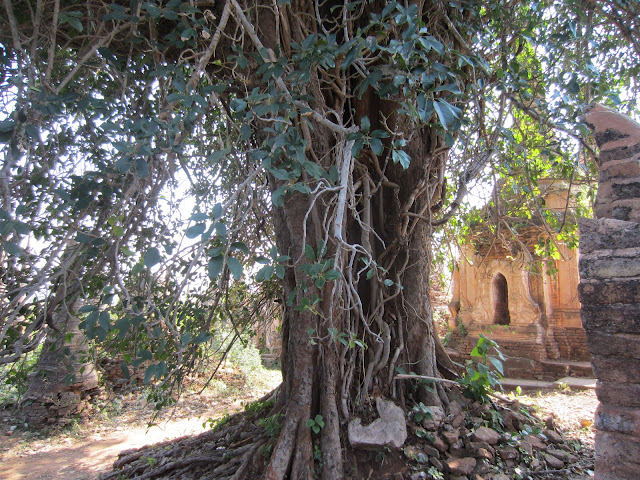